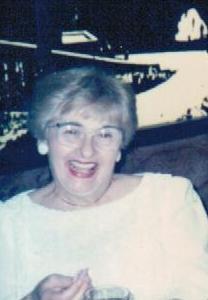 Virginia Beach—Adelina Lapetina Allen “Deda”, 91, passed away on January 23, 2013, in Virginia Beach.
Mrs. Allen grew up in the Willoughby section of Norfolk, Virginia. After graduating from Holy Trinity High School, she attended the Julliard School of Music where she studied opera. In her twenties, she traveled and sang with some of the big bands of the era. She also appeared in several Broadway plays. She married Sam Bofisal Allen in New York City, and later moved to Irvington, New York, before returning to retire in Virginia Beach in 1975.
Together, Sam and Deda helped to start up the Virginia Beach Recreation Center’s bridge-playing program. They were married for 39 years until his death in 1988. She continued to set up games and remained an active bridge player until age 90. Deda also did an hour work out at the Bayside recreation center pool several times a week well into her eighties. A devotee of live theater, she attended Virginia Beach Little Theater for decades. And she loved her crossword puzzles. She was a member of the First Church of Religious Science.
She leaves behind loving, devoted daughter, Debra Lee Allen; nieces Theresa Ann Salyer and Barbara Young; wonderful friend Ellen Maccarrone Cupp; and numerous cousins.
Mrs. Allen was a vibrant, generous, charming lady who will be greatly missed. Services will be private.

To leave a condolence, you can first sign into Facebook or fill out the below form with your name and email. [fbl_login_button redirect="https://vacremationsociety.com/obituary/adelina-lapetina-allen/?modal=light-candle" hide_if_logged="" size="medium" type="login_with" show_face="true"]
×