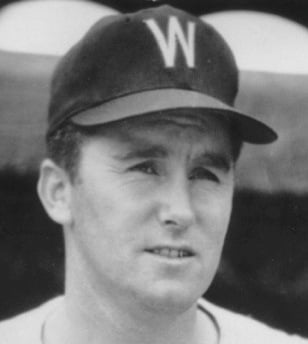 Alton Leo “Deacon” Brown, 90, passed away peacefully at home on January 10, 2016, surrounded by his loved ones.
Al was born in Norfolk to the late Herbert and Naomi Ward Brown. He was preceded in death by one son, Thomas Steven Brown; his sisters, Dorothy Marker, Malvine Hudgins and Ruby Flowers; and his brothers Elliott “Zeke” Brown, Sr. and Tommy Brown.
Al joined the U.S. Army (1944-46) and served in the European theater, primarily in Italy and Germany. It was during his time in the service that he played baseball for the first time. When he returned home he pitched in local city leagues until 1948, when he began his professional baseball career as a pitcher for the Roanoke Rapids Jays. While with the Jays, Al was voted the Coastal Plains League MVP in 1950.
Al made his Major League debut in 1951, pitching for the Washington Senators. In his first game as a Senator, he walked Joe DiMaggio and held the Yankees scoreless, allowing just two hits in his two-inning debut. He pitched six more games with the Senators before returning to the minors with the Chattanooga Lookouts. Al would go on to pitch several more seasons, having stints with the Richmond Colts, Norfolk Tars, and York White Roses. It was with the White Roses where he befriended a talented young kid named Brooks Robinson, who would remain a lifelong friend.
After retiring from baseball in 1956, Al returned to work as a longshoreman in Norfolk. He retired from ILA Local 1624 and Southern Stevedoring in 1980. Al was also an avid golfer, obtaining a 3 handicap, and was a member of Norfolk Moose Lodge #39, VFW Post 4809, and the Major League Baseball Players Alumni Association.
Left to cherish his memory are his wife of 67 years, Shirley Biggs Brown; his daughters, Leslie Fournier (Mike), Kay Brown (Robert Read) and Kelly Howard; his son, Alton Matthew Brown; four grandchildren and five great–grandchildren.
At Al’s request, there will be no service. In lieu of flowers, memorial donations may be made to the Kempsville Volunteer Rescue Squad at P.O. Box 62345, Virginia Beach, VA 23466 or online at www.kvrs.org.

To leave a condolence, you can first sign into Facebook or fill out the below form with your name and email. [fbl_login_button redirect="https://vacremationsociety.com/obituary/alton-leo-brown/?modal=light-candle" hide_if_logged="" size="medium" type="login_with" show_face="true"]
×