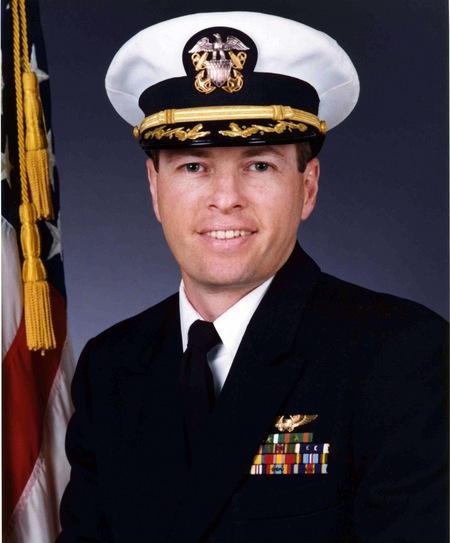 Retired United States Navy Captain, Andrew W. Eddowes, age 52, passed away January 29, 2013, after a courageous battle with Amyotrophic Lateral Sclerosis ALS. Born in Baltimore, MD, he was the son of the late Edward E. Eddowes and Elizabeth A. Eddowes of Tucson, AZ.
Andrew graduated from the University of Arizona in 1982. He was commissioned upon completion of the Aviation Officer Candidate School in Pensacola, FL, in 1983, and was later designated as a naval flight officer in 1984. In his 22 year naval career, assignments took him to Rota Spain, London UK, Newport RI, San Diego CA, Gaeta Italy and Norfolk VA. The highlight of his career was his service as Commanding Officer of Fleet Air Reconnaissance Squadron TWO VQ-2 in Rota Spain. He is a graduate of the Naval War College.
After retiring from naval service, Andrew dedicated his life to fighting ALS. He participated in three Veterans Administration-sponsored ALS studies, a UVA-sponsored experimental ALS drug study and the newly established 2010 National ALS Registry. His family requests that, in lieu of flowers, donations be made to the ALS Association in Andy’s memory.
Andrew is survived by his wife, Ellen; daughter, Rachel; and brother, Scott of San Jose, CA.
A memorial service will be held at 3 p.m. Friday, February 22, at Bayside Presbyterian Church. His funeral will be conducted at a later date in Sandusky, OH. Cremation Society of Virginia is handling arrangements.

To leave a condolence, you can first sign into Facebook or fill out the below form with your name and email. [fbl_login_button redirect="https://vacremationsociety.com/obituary/andrew-w-eddowes/?modal=light-candle" hide_if_logged="" size="medium" type="login_with" show_face="true"]
×