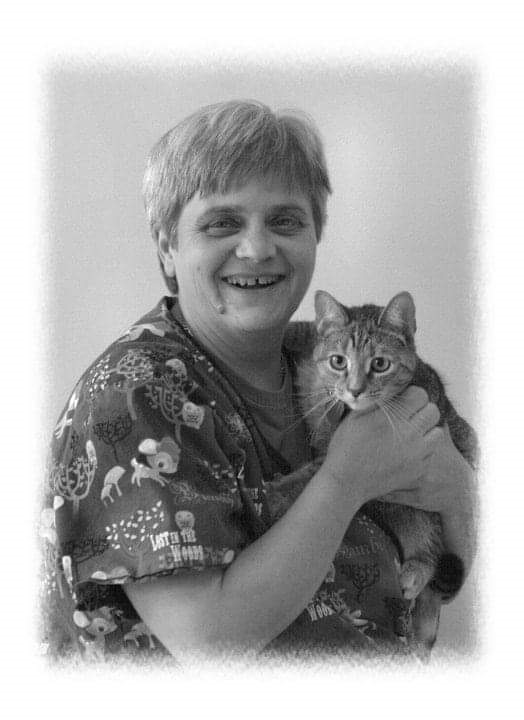 She was preceded in death by her maternal grandparents, Walter Lee and Mary Carter Smith, and her stepfather, James Bernett.

Her cousin, Aimee Hutcherson and her husband, Patrick Hutcherson, of Seaford VA. Their children, Van Preston of Richmond VA, Joseph Dalton and Emily Blair Hutcherson of Seaford VA, with whom Angela made her home. They were all very special to Angela.

A special cousin, Danny Smith and his wife, Rebecca, and their children, Nathan and Hannah Smith of Smithfield VA.

Angela attended school in York County, Va. She graduated from York High School in 1986.  She attended Freed-Hardeman College in Henderson, Tennessee from August 1986-May 1987.

Graduated from Thomas Nelson Community College, Hampton, VA May 1993. She worked for Miller Oil Company, Yorktown VA, Rennie’s Petroleum, Hampton, and Subway Sandwiches, Yorktown, VA between the years 1991 to 2003, where she met many people. Angela was a friend to everyone and everyone knew her name. She went on to spend about 6 years at APAC in Newport News, VA. By this time, she was beginning to discover that caring for animals was something she really wanted to do so she enrolled in Penn-Foster Career School and completed her training in November 2008. She volunteered at Peninsula SPCA in the veterinary clinic in 2008 and moved to a full time position in 2009. She was a medical team staff member and a part of the shelter family for 12-1/2 years. She was also a member of the surgical team at Fixin’ to Save Spay and Neuter clinic, White Marsh VA for 13 years. She was a strong believer in the value of spaying and neutering and hoped to one day work herself out of a job. Her passion in life was taking care of animals. She loved them all and if she could, she would have adopted them all and taken them home with her.

Angela didn’t have a lot of spare time but when she did, she enjoyed watching NASCAR. Her favorite driver was Denny Hamlin. She especially enjoyed watching the wrecks. She loved Talladega because it was famous for racing wrecks. She also enjoyed watching wrestling. The Rock was her all-time favorite wrestler and movie actor. Christmas was also one of her favorite times of the year because she could watch “How the Grinch Stole Christmas” but she really didn’t need an excuse to watch it. She was a year round “Grinch” fan.

A celebration of Angela’s life will be held on a date in the near future.

In lieu of flowers, please consider making a memorial donation to the

Cremation Society of Virginia-Newport News is handling the arrangements.

To leave a condolence, you can first sign into Facebook or fill out the below form with your name and email. [fbl_login_button redirect="https://vacremationsociety.com/obituary/angela-lynn-moore/?modal=light-candle" hide_if_logged="" size="medium" type="login_with" show_face="true"]
×