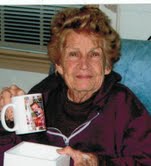 Ann left the earth to be with the Lord on January 25, 2013. She was born in Wilkes County in 1915, the same year Virginia Beach was established. That was fitting as she thought there was nowhere else anyone would want to live if they had ever been here. Ann celebrated her 98th birthday on January 8 and had made plans to go dancing with David at the Cavalier on her 100th birthday but as she always said, the Lord came for you when it was your time to go. Ann enjoyed amazing good health, living on her own until she broke her hip in 2010.. She said “You have your first million dollars when you have good health.” After she broke her hip she had caregivers who provided excellent care. But her life was enriched by the very special love and care of David Liik and Lynn Bedics who were concerned about her every day as if she were a part of their own family.
Ann moved to Virginia Beach in 1955 from Richmond and began work at Agnes Beauty Shop on 25th Street where she loved her work and her customers. She bought property and managed her own and other rentals all the while working full time. She was very proud of her business, Ann’s Apartments, displaying her sign on Baltic Avenue and on her white station wagon. She was an inspiration to many, achieving her goal of owning property, mentoring tenants and friends, and hosting family and friends for their vacations at the beach.
Ann was a member of Galilee Episcopal Church for 55 years, and recently learned she was the second oldest member of the congregation. She volunteered in the kitchen as a member of the former .Martha Guild which prepared and served a luncheon during Garden Week each year. She was an active member of the Bishop Tucker Circle until the summer of 2012. When an issue arose in the church that resulted in some members attending other churches, Ann said she had been at Galilee before the problem and she would be attending after it was resolved.
Ann had an amazing green thumb and had a beautiful yard and garden. She would move a plant and when told it was not the right time she would say she talked to her plants and they would be fine, and they always were.
She is survived by her daughter, Sophia P. Freire, her Susie Q, of Virginia Beach, her grandson Harry Butch Letts, the light of her life, and his daughter, Faith Ann Letts, of Cape Coral, FL. She is survived by nephews Ben Preddy and David Preddy, and nieces Diane Rose, Sharon Kenny, and Theresa Ferrell. She is also survived by her dearest friends David Liik; Alex Sulecki, husband Tim and son Joshua whom she loved as another grandson; Betty Schram and her four children Jimmy, Debbie, Ray and Stephanie Ann who all called her Grandma Ann; and a host of family and friends. She was predeceased by her mother Sally Rohrig, son Thomas Pappas, son-in-law John Freire, and stepson Johnny Pappas. . We will always have our love of her in our hearts and wonderful memories as well as the many lessons she taught us. Services will be held at Galilee Church Monday, February 4, 2013, with internment at the Columbarium and a reception to follow at the church. Cremation Services of Virginia are handling the arrangements. In lieu of flowers donations may be made to the Kitchen of Galilee Church, 42nd & Pacific Avenue, Virginia Beach, VA 23451.

To leave a condolence, you can first sign into Facebook or fill out the below form with your name and email. [fbl_login_button redirect="https://vacremationsociety.com/obituary/ann-a-stuehrenberg/?modal=light-candle" hide_if_logged="" size="medium" type="login_with" show_face="true"]
×