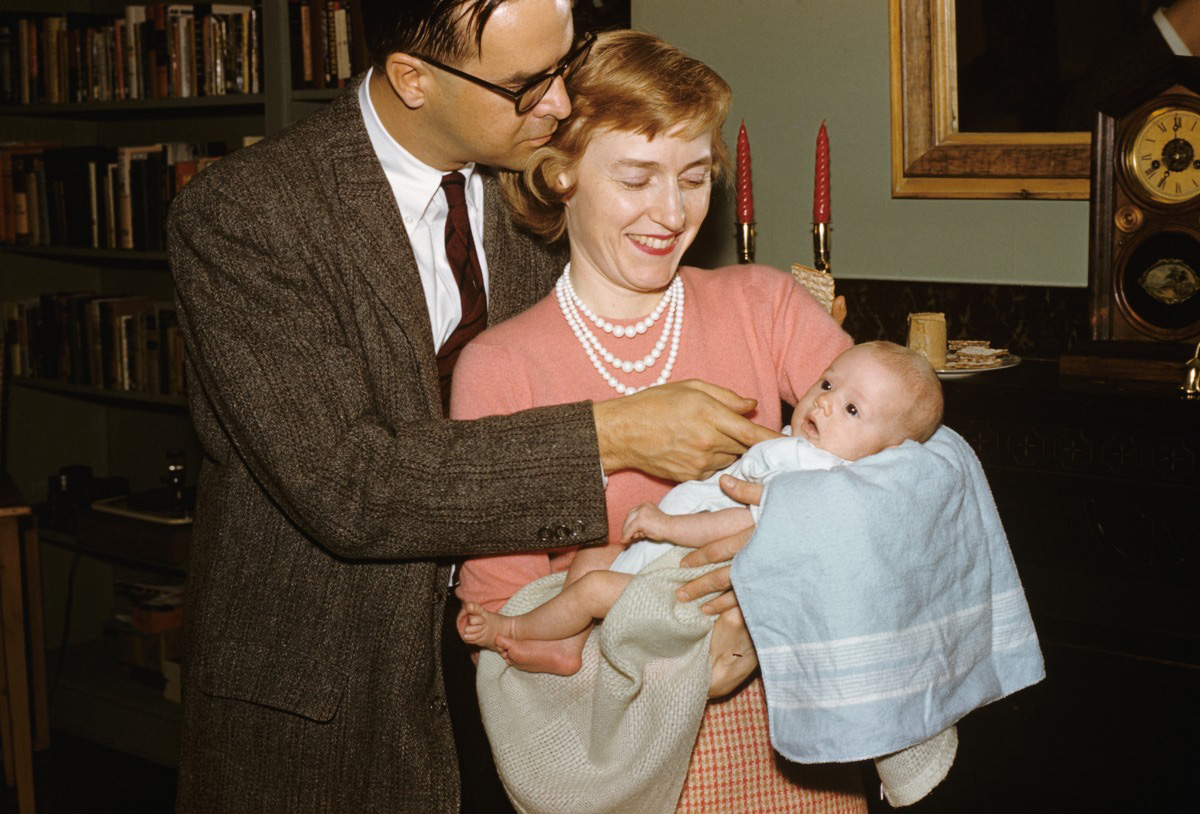 Anne Spiers Hoving, 90, died on May 2, 2017, in Williamsburg, Virginia. She suffered from vascular dementia, a consequence of temporal arteritis and other complications from Systemic Lupus. Anne had a bold spirit tempered by a loyal and loving heart. She held strong convictions and despite being teased as a child, she remained defiantly proud of her lefthandedness, her freckles and her natural Titian hair.
Anne was born on April 7, 1927, in Norfolk, Virginia, to John Ernest Fisher, Jr. and Norma Amanda Spiers. Both parents died before Anne was 3, and she and her sister Jean were raised in Radford by their maternal uncle, Judge John B. Spiers, a Democrat who represented the 12th District of Virginia in the General Assembly from 1934-1946, and his wife, Maxine Graves Spiers.
Anne graduated from Radford College (at that time the Women’s Division of Virginia Polytechnic Institute) in 1948 with a B.A. in English and Education with a minor in Spanish. She was Senior Class President, a member of Kappa Delta Pi National Honor Fraternity in Education, and in Who’s Who among Students in American Universities and Colleges.
She started her career as a teacher of middle and high school students in Saltville, Virginia. Hoping for a posting overseas, she took a job with the Joint Chiefs of Staff (JCS) and moved to Washington, DC. Anne was never stationed abroad by the JCS, but while at the Pentagon, one of the officers noticed that her talents were underutilized and introduced her to Brigadier General Milt Arnold, V.P. for Operations and Engineering at the Air Transport Association (ATA). ATA was the national trade association for U.S. airlines and played a key role in the creation of the Civil Aeronautics Board, establishment of the air traffic control system and airline deregulation. Arnold hired Anne to be his assistant, and during her tenure she worked with some of commercial aviation’s pioneers, including Juan Trippe (Pan Am), and Eddie Rickenbacker (Eastern Airlines). It was at ATA that she met her future husband, John Hoving, who was V.P. of Public Relations. They married in 1958 and during their 52 years together lived in Washington and Cincinnati, eventually retiring to Williamsburg in 2000.
Anne was passionate about politics and world affairs and watched Fareed Zakaria every Sunday. She was an artist with a wonderful sense of style, and filled her life with literature, history, music and poetry. She also loved flowers and landscape design and being a member of the flower guild at St. Columba’s Episcopal Church in Washington, D.C.
Anne put her husband and children first for most of her life, but she never lost her fiery spirit and independence of thought. One of her proudest moments in Washington was when she and John were included in the U.S. Senate dinner in honor of Nelson Mandela in 1990, on his first trip to the U.S. after he was released from prison.
Anne is survived by her daughters, Dr. Karen Hoving of Aurora, Colorado; and Kate Hoving of Williamsburg, Virginia; granddaughters Shelby Hoving of Aurora, Colorado; and Courtney Hass of Cincinnati, OH; great granddaughters Rowan, Eleanor and Frances of Cincinnati, OH; and nieces and nephews Amanda Gray, Andrew W. Townes III; Joanne Spiers Moche, Sherry Spiers Spratt, John Spiers III; and Vikki Catellacci. She was preceded in death by her parents and her husband, John H.F. Hoving; brother, John B. Spiers, Jr.; and sister, Jean Spiers Townes.
She had several quotes she used as touchstones and encouraged her children to learn, including: “Courage is grace under pressure” (Hemingway); “A thing of beauty is a joy forever” (Keats); and from Romans 12:21 – “Do not be overcome by evil, but overcome evil with good.”
As a young woman, Anne admired the works of Edna St. Vincent Millay. Just a week before she died, her eyes lit up as she recited one of her favorites: “My candle burns at both ends; It will not last the night; But ah, my foes, and oh, my friends— It gives a lovely light!”
The family is grateful to Agape Home Care (especially Debra Foord, Connie Mourredes, Sonja Canales, Luz Sanabria and Renee Palmer) for making it possible for Anne to stay at home during her long illness.
The family suggests that anyone who wishes to send a donation in her name do so to the Lupus Research Alliance, www.lupusresearch.org.

To leave a condolence, you can first sign into Facebook or fill out the below form with your name and email. [fbl_login_button redirect="https://vacremationsociety.com/obituary/anne-spiers-hoving/?modal=light-candle" hide_if_logged="" size="medium" type="login_with" show_face="true"]
×