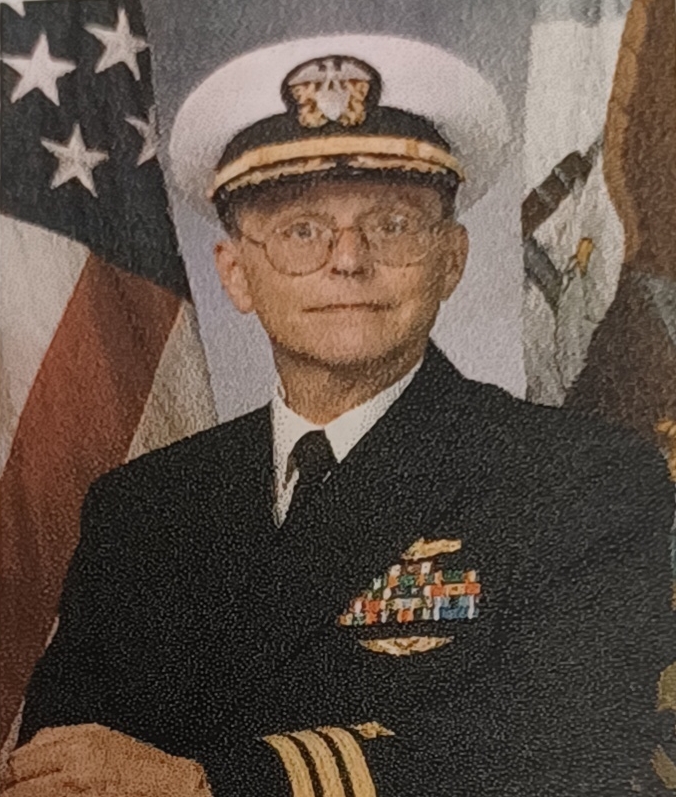 Bradley K. Slusher, 67, of Chesapeake died peacefully at home, surrounded by family, on Friday, March 4, 2022, after a courageous six-month battle with pancreatic cancer.

Upon completion of the Navy Supply Corps School, where he graduated as the Honor Graduate, receiving the American Logistics Association Award, Commander Slusher served on board the USS DOWNES (FF-1070) as Assistant Supply Officer and later fleeted up to Supply Officer.  From June 1985 through November 1988, he was assigned to Navy Supply Corps School, Athens, GA, as Food Service/Retail Operations Instructor and later as Training Support Officer.

From November 1988 through December 1990, he served as Assistant Supply Officer and Stock Control Officer on board USS VULCAN (AR-5).  After receiving his master’s degree in Business Administration from Old Dominion University, graduating with distinction, he reported to Commander, Naval Surface Force, U.S. Atlantic Fleet in August of 1992.  His initial assignment there was temporary duty as Supply Officer, USS HUE CITY (CG-66), followed by assignments as Supply Operations Officer and Ship’s Program Officer.

His next assignment was Assistant Supply Officer on board USS NASSAU (LHA-4) from June 1995 through June 1997.  He was later assigned as Deputy Logistics Officer on staff of CTF 63/COMNAVSURFGRUMED in Naples, Italy, from July 1997 through June 2000.  His final assignment was Special Funds/Contingency Officer in the Comptroller Directorate on the staff of Commander, U.S. Atlantic Fleet.  He retired after a 22-year naval career in October 2003.  Following his naval career, he worked for AMSEC, LLC, as a Government Property Manager for 13 years.

Brad’s passions were spending time with his family and traveling whenever possible.  He was a devoted husband and father who put his family first.  While the kids were growing up, he attended sporting and school activities (soccer, soft-ball, baseball, figure skating, hockey, football, choir and marching band) and planned family vacations.  As the kids matured, family time remained important; he worked tirelessly to ensure everyone was afforded higher education and continued to support their various endeavors throughout his life.  His travel adventures continued through 2021, with his final travel to DC and Las Vegas to attend Kansas City Chiefs games in October and November, respectively.

He was an avid sports fan and loyal follower of Kansas City Chiefs and Royals.

No plans have been made for a memorial service at this time.  Internment is planned for Arlington National Cemetery, with full military honors, followed by a Celebration of Life with family and close friends.

In lieu of flowers, family requests donations be made to the Navy Supply Corps Foundation, Navy Wounded Warrior Program, Operation Blessing, or a charity of significance to you in Brad’s memory.

To leave a condolence, you can first sign into Facebook or fill out the below form with your name and email. [fbl_login_button redirect="https://vacremationsociety.com/obituary/bradley-kent-slusher/?modal=light-candle" hide_if_logged="" size="medium" type="login_with" show_face="true"]
×