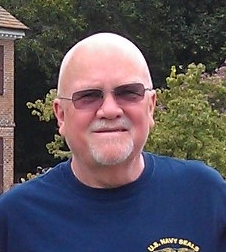 Bruce Thomas Russell, 74, passed away peacefully at his home in Yorktown, Virginia, on June 20, 2014, with his family by his side, after a long battle with cancer.
Bruce was born in Clarksville, Texas on November 29, 1939, to Iver and Lulu Mae Russell.
Bruce retired from the United States Navy after 21 years of service. His happiest, most vital years were those he spent as a member of SEAL Team One and Underwater Demolition Teams 11 & 12. After retiring from the military, Bruce returned to college and embarked on a new career as a radiology technician. He worked at Ashland Community Hospital in Ashland, Oregon, until his retirement in 2002. He left Oregon, and by way of Las Vegas, ended up in The Villages, Florida, where he lived a few years in close proximity to a group of fellow Vietnam Era SEAL Team veterans. As much as he loved being with his SEAL buddies, the call to be with family was stronger. Bruce, and his wife Robin, relocated to Virginia where they lived down the street from his daughter and precious grandsons until his death.
Bruce is preceded in death by his parents Iver Russell and Lulu Mae McBride, and sister Vera “Sue” Russell. He is survived by his loving wife Robin, children Suzanne Frickey Steve of Portland, OR, Heather Rausch Skip of Yorktown, VA, and Joshua Russell of Medford, OR. Grandchildren Trey, Tristan and Trent Rausch of Yorktown, VA, Cassandra Frickey, Christopher Frickey Ava, and Vanessa Frickey, great-granddaughter Addelyn, all from the Portland, OR area, as well as many nieces and nephews, and sister Pamela Jane Russell, from Wichita, Kansas.
A special thanks to Mark Fleming, MD, Kelly Padgett, PA, and Elaine Wilton of VOA for many years of loving care, and to the Sentara Greater Peninsula hospice team that cared for Bruce and the entire family throughout the last few months of his life.
Memorial donations may be made to the Navy SEAL Foundation, 1619 D Street, Virginia Beach, VA 23459, to the National Navy UDT-SEAL Museum, 3300 N Highway A1A, North Hutchinson Island, Fort Pierce, FL 34949, or to Sentara Greater Peninsula Hospice, 200 Enterprise Dr., Newport News, VA 23603.

To leave a condolence, you can first sign into Facebook or fill out the below form with your name and email. [fbl_login_button redirect="https://vacremationsociety.com/obituary/bruce-thomas-russell/?modal=light-candle" hide_if_logged="" size="medium" type="login_with" show_face="true"]
×