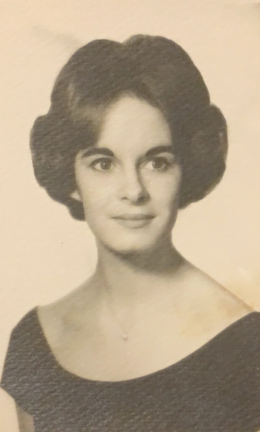 Carla Antonia Archibald Grant, 83, passed away peacefully at home surrounded by loved ones on August 12, 2022.  Carla, also known as Toni, Mom, Geen, and Grandma, was born in Coronado, California on January 31, 1939, with her identical twin sister Pat.  The beautiful twins were featured on the front page of the Coronado Journal.  Born to Robert Eldon Archibald and Lucia D’Amico Archibald, she attended Coronado High School and University of California Santa Barbara, before marrying Navy Lieutenant Edward James Grant on November 25, 1961.  The devoted Navy wife called many ports as home before settling in Virginia Beach, Virginia in June 1967.  After “enjoying” the labors of a stay-at-home mom for 16 years, she entered the retail industry working at Athletic Attic; Penn’s Luggage, SteinMart and West Point Pepperell followed, finally retiring from the Va Beach Public School System as a member of the Bayside Middle School kitchen crew.

Carla enjoyed spending time with family, traveling, the beach, knitting, needlepoint, puzzles, and cards (especially Bridge and the family game “Liverpool”). She was an avid reader that could knock out a novel in 2 days.  She loved going to the movies with whoever she could find, or by herself.  She was a huge fan of musicals, especially Les Mis. She never missed Wheel of Fortune and she will go down as the best Jeopardy player in the family.  Her favorite sports to watch on TV, and attend, were tennis, figure skating, gymnastics, and the occasional UVa/VT/ODU/Ravens football games.  She loved the Olympics as well, but most of all, she loved to watch her grandkids play in all their sports and activities.

She is preceded in death by her parents; sisters Suzanne “Suki” Collins, Sally Ford, Margo Lee, and Patricia Mancano, father of her children Ed Grant; and her best friend Denny Stewart.

She was a member of Saint Nicholas Catholic Church since 1967, where she was a mainstay in the choir and a valued part of the St. Nick’s family.

Everyone who knew her loved her.  She was a supportive, patient, selfless, caring, and giving person.  Her smile lit up a room and she will be sorely missed here on Earth.

Funeral mass and reception afterwards will be held at Saint Nicholas Catholic Church on Saturday, August 20th at 11am.

To leave a condolence, you can first sign into Facebook or fill out the below form with your name and email. [fbl_login_button redirect="https://vacremationsociety.com/obituary/carla-antonia-archibald-grant/?modal=light-candle" hide_if_logged="" size="medium" type="login_with" show_face="true"]
×