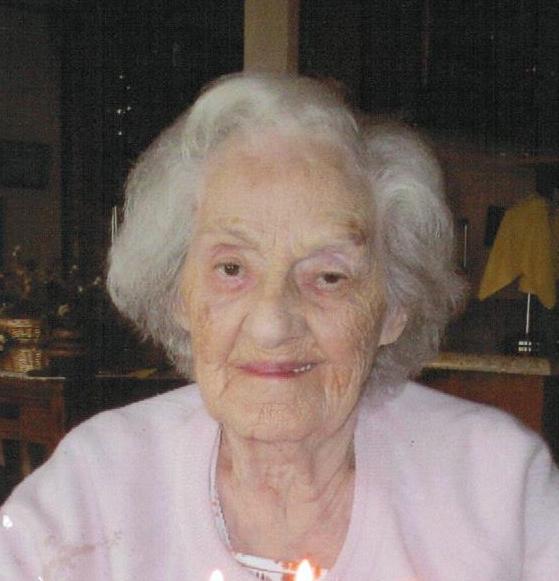 Mrs. Cecile C. Brosseau Malouf, 102 years old, passed away on Thursday, February 11, 2016. She was a loving mother, grandmother, great grandmother and great-great grandmother who will be so greatly missed.  She lived a wonderfully long life. She was a caring, compassionate gentle person who always put others before herself.  Now she’s in the arms of the Lord and with all those who have gone before her.

She was born in Gravelbourg, Saskatchewan, Canada on August 16, 1913 to Eugene and Cora (Piedalue/Praire) Brosseau. At about age five, she and her family moved to Highgate, Vermont where they lived on a farm.  Cecile was one of 15 siblings.

Cecile received a degree in nursing from St. Albans, Vermont Hospital, and she worked as a private duty nurse as well as at St. Albans Hospital. She was married on April 11, 1942 to Joseph W. Malouf who predeceased her on November 2, 1991.  She raised her family in Beacon, New York, and after retirement, she and her husband moved to Fort Pierce, Florida in 1975.  In 1998, she moved to Virginia Beach where she lived at First Colonial Inn in independent living until 2013, and then she moved to Marian Manor Assisted Living at almost 100 years old. At her death, she resided at Lake Taylor Transitional Care Hospital.

A mass of remembrance will be celebrated privately. Burial will be in Fort Pierce, Florida at a later date.  In lieu of flowers, donations may be made to EdMarc Hospice for Children or St. Jude Children’s Hospital.

To leave a condolence, you can first sign into Facebook or fill out the below form with your name and email. [fbl_login_button redirect="https://vacremationsociety.com/obituary/cecile-clementine-brosseau-malouf/?modal=light-candle" hide_if_logged="" size="medium" type="login_with" show_face="true"]
×