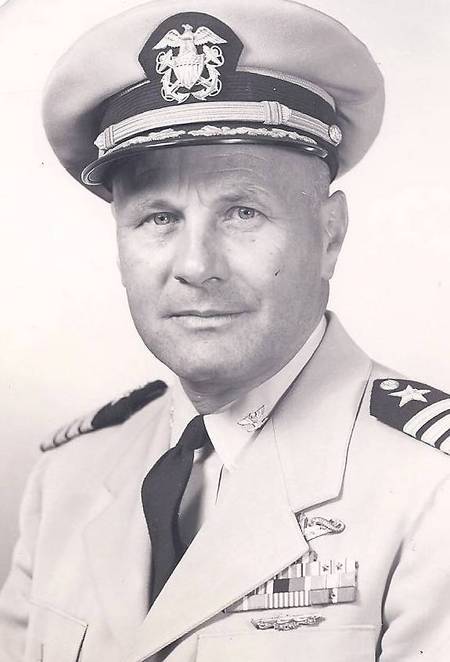 Captain Charles Joseph Beers, USN Ret, 94 years old, passed away peacefully at home at Westminster Canterbury in Virginia Beach. Born in Detroit, Michigan on February 11, 1917, he attended the United States Naval Academy where he played football and baseball and where he BEAT ARMY in the 1939 Army-Navy football game. After graduating in the Class of 1940 he was stationed on the battleship USS Pennsylvania BB 38 during the attack on Pearl Harbor on 7 December 1941. He transferred to the Submarine Service and subsequently completed ten war patrols in the Pacific Ocean. He commanded the USS Redfish, USS Allen M. Sumner, USS Oglethorpe and Service Squadron Four; he retired in 1970 with 30 years of service. After retirement from the United States Navy, he was Director of Registration at Old Dominion University for 12 years. His Naval Academy legacy was continued in his son, Rear Admiral, retired who graduated in 1967 and his grandson, Commander, who graduated in 1995.
He will be missed by his wife Joann Broaddus Beers, whom he married in 1969, and by his children Chuck, Jr and Susan Beers; Susan Hester and Lee Stephenson; JoAnn’s children Cynthia Broaddus and Tommy Rose; Jim and Brenda Broaddus. He was a special Grand Pop to his 5 grandchildren and 6 great grandchildren. His first wife, June Wood Beers, died in 1967. He is also survived by his brother Wally Beers and sister Margaret Probst.
Joann extends her deep gratitude to the nurses and CNAs of the Chesapeake and the Hoy Center for his care.
Memorials donations may be made to Westminster Canterbury Foundation, 3100 Shore Dr, Virginia Beach, VA 23451.
A Memorial Service will be held at the Westminster Canterbury Chapel on Saturday, 26 February at one o’clock PM.
Online condolences may be expressed at www.cremate.org

To leave a condolence, you can first sign into Facebook or fill out the below form with your name and email. [fbl_login_button redirect="https://vacremationsociety.com/obituary/charles-joseph-beers-sr/?modal=light-candle" hide_if_logged="" size="medium" type="login_with" show_face="true"]
×