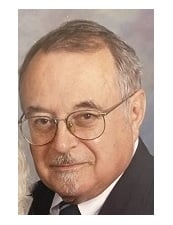 Born on 7/20/27 and raised outside of Chicago, in the town of LaGrange, IL, he was a life-long fan of the Chicago Cubs, celebrating in 2016 when the team actually won a World Series in his lifetime. He received a B.S in Electrical Engineering from the University of Illinois in Champaign-Urbana, and an M.S. from Ohio State University in Columbus where he met his wife of 69 years, Jo Anne Haas Foudriat. He was granted his PhD. there in 1966.

Edwin had an illustrious career as an electrical engineer and computer scientist at the National Aeronautics and Space Administration at Langley Air Force Base from 1957-1967. Among many other projects, he helped design the lunar module for the Apollo 11 lunar landing. From 1967 to 1974, he was a professor of the School of Engineering at Marquette University in Milwaukee, WI then returned to NASA until 1987. After his so-called retirement he was an adjunct professor at Old Dominion University in Norfolk, VA. During the course of his career, he authored or co-authored hundreds of research papers.

His academic achievements led to invitations to present papers at computer conferences all over the world and he became a dedicated world traveler. He and Jo Anne visited dozens of countries throughout Europe, South America, and Asia. Whether it was Machu Picchu in Peru, or the Greek Isles in the Mediterranean, or the Imperial Gardens in Tokyo, he devoted energy and focus to exploring other lands and cultures.

Edwin had a long love of the outdoors, beginning in his youth when he and his brother camped and canoed in the Boundary Waters of Minnesota. He shot the rapids of the Colorado River. An avid sailor and fisherman, he rarely turned down an invitation to go out on the York River or the Chesapeake Bay with his neighbors. At the age of 62, he took up skiing.

He provided many years of volunteer service and support to his beloved Virginia Living Museum in Newport News. He was also honored by York County for his service to the York County Senior Center, where he taught computer classes for many years. In addition, he served as a board member of the Marlbank Recreation Association, volunteered for the annual Yorktown Day Celebration and and delivered Meals on Wheels. He had a wide range of hobbies and interests that he pursued with purpose and devotion: gardening, photography, astronomy, history, art, diesel mechanics, beer making, bread making, antiquing, and woodworking. His family often compared him to the Energizer Bunny.

In lieu of flowers, memorial contributions can be made to the Virginia Living Museum, 524 J. Clyde Morris Blvd., Newport News, VA 23601.

To leave a condolence, you can first sign into Facebook or fill out the below form with your name and email. [fbl_login_button redirect="https://vacremationsociety.com/obituary/dr-edwin-c-foudriat/?modal=light-candle" hide_if_logged="" size="medium" type="login_with" show_face="true"]
×