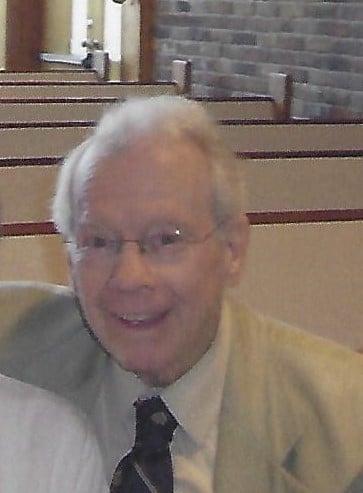 Dr. Richard Dale Foster, “Doc”, 87, beloved husband, father, grandfather, great-grandfather, and friend to all was called home to the Lord on February 22, 2017. He passed peacefully in his home surrounded by those whom he loved and who loved him. Richard was born in Pittsburgh, PA to the late Kenneth B. and Lorraine D. Foster. Preceding him in death was his son, Richard B. Foster. Left to cherish his memory is his loving wife of 65 years, Anita Paff Foster, “Paige”, his daughters Gail F. Biermann (Edward), and Cheri L. Donahue (Kenneth), and his daughter-in-law, Martina H. Foster. His seven grandchildren: Colleen Donahue (Ron Millett), Ian Biermann (Elizabeth), Courtney Dunn (Jason), Keenan Biermann, Kenneth D. Foster (Logan), Cameron Foster, and Kenda Donahue. His seven great-grand children: Shane Donahue, Joel, Wesley, Trent, Abigail Millett, Jason Jr. and Jessica Dunn. He is also survived by his brother, Kenneth B. Foster and his sister, Jean Mitchell and many nieces and nephews. Dr. Foster was a graduate of the University of Pittsburgh where he received his DMD in Dentistry (1954). He retired as a Commander from the US Navy Dental Corps after serving honorably for over 21 years. Upon retirement, he opened his private practice in the Kempsville area of VA Beach where he continued in private practice dentistry for 37 years. He continued his dental education by becoming a fellow of the Academy of General Dentistry (1974), a Fellow of the American Society of Geriatric Dentistry (1988), a Member of the International Congress of Oral Implantologists, a Member of the American Academy of Implant Dentistry (1992), and an Associate Fellow of the American Society of Osseointegration. He was a member in good standing of the American Dental Association, Virginia Dental Association and the Tidewater Dental Association. He provided services to residents at Lake Taylor Transitional Care Hospital from 1975 to 2013. He provided dental services for SEVAMP to elderly persons in need. He was an active member of St. Stephen’s Episcopal Church since 1964 serving as a member of the vestry, senior warden and choir member. The church is filled with his various religious carvings. He was a member of the International Order of St. Luke the Physician. Doc was an avid sailor who loved racing his boat, BLUEJACKET, on Thursday nights with the Willoughby Racers. He was also a member of the Broad Bay Sailing Association where he received many awards with his devoted crew for their racing achievements. He will be greatly missed by his loved ones, friends, and colleagues. Funeral service with military honors will be held at 11:00 am on March 11, 2017 at St. Stephen’s Episcopal Church (1445 Norview Ave. Norfolk). Family will receive friends at Altmeyer Funeral Home (5792 Greenwich Rd., VA Beach) on Friday, March 10, 2017 from 5:00pm-7: 30pm. In lieu of flowers, memorial gifts can be made to St. Stephen’s Episcopal Church.

Cremation Society of Virginia is assisting the family.

To leave a condolence, you can first sign into Facebook or fill out the below form with your name and email. [fbl_login_button redirect="https://vacremationsociety.com/obituary/dr-richard-dale-foster/?modal=light-candle" hide_if_logged="" size="medium" type="login_with" show_face="true"]
×