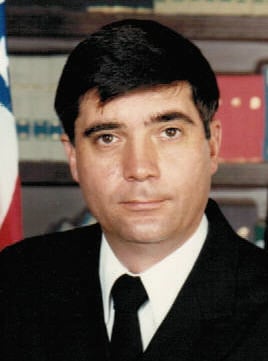 Edward C. Ned Geiger, born January 18, 1950, passed away suddenly on March 20, 2012 at his home.
Ned was, most of all, a loving husband to his wife of 34 years, Cherie. The greatest blessing in their life is their son Joshua, a 1LT in the United States Army currently serving in Afghanistan, and his wife, Cindy Kao, clinical psychology doctoral candidate at The Chicago School of Professional Psychology in Los Angeles.
A graduate of Kenyon College and the Naval War College, Ned is fondly remembered by many as a good friend to be relied upon in difficult times and with whom to share festive occasions. Ned served in the United Sates Navy for 30 years retiring as a Captain in 2002. He then joined Engineering Services Network, finally retiring in 2011. His retirement, though brief, brought him great happiness. He had the gifts of cherished friends and a family who loved him very much. He was at peace with his life.
Ned is also survived by his brother, Dr. Ralph Geiger, his sister-in-law, Terri Hamilton, and 2 nieces and a nephew. Others who will fondly remember his friendship and partnership are his colleagues from the E-2 C Hawkeye community, his DGSIT partners at ESN, and his friends from The Williams School.
A memorial service to honor the love, dedication, and treasured friendship which were the hallmarks of Ned’s life will be held at 4pm on Saturday March 31, 2012 at Royster Memorial Presbyterian Church in Norfolk, VA.
In lieu of flowers, donations may be made to one of the following:
The Baldwin Fund of the Williams School, 419 Colonial Avenue, Norfolk, VA 23507.
VAW/VRC Memorial Scholarship Fund, P.O. Box 15322, Norfolk, VA, 23511-0322.
The memory of Ned’s love and friendship will be cherished in the hearts of all who had the privilege of knowing him

To leave a condolence, you can first sign into Facebook or fill out the below form with your name and email. [fbl_login_button redirect="https://vacremationsociety.com/obituary/edward-c-geiger/?modal=light-candle" hide_if_logged="" size="medium" type="login_with" show_face="true"]
×