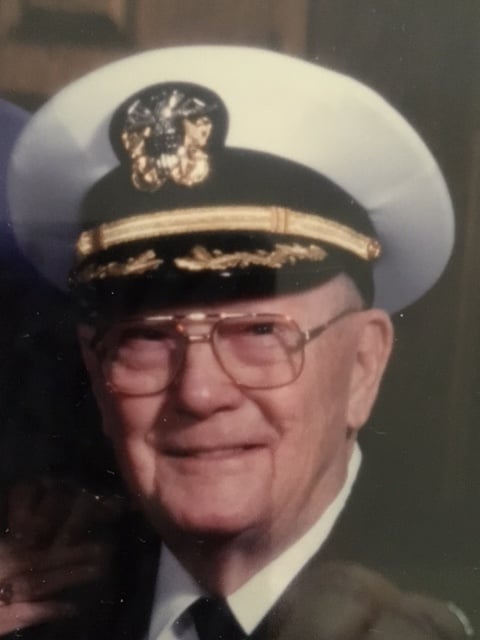 Edward Stock
Date of Death: February 26, 2017
Print
Email
Service
St. Martin's Episcopal Church
1333 Jamestown Road
Williamsburg, VA
Edward John Stock, 96, died February 26, 2017 in Williamsburg, Virginia. Edward was born in Rochester, NY. The family moved to Cleveland, OH when he was two years old and they lived there throughout their lives. During the Depression, Ed’s father was lucky enough to have work but would take Edward with him to the Cleveland docks to sweep up spilled coking coal to heat their home. Ed and his two brothers shoveled the coal into the basement and then into the furnace, ultimately spreading the ashes into their mother’s garden for fertilizer. When not helping at home or in the garden, Ed was an avid model airplane enthusiast. His brothers remember him covered in glue and model paint. He graduated from West Technical High School in Cleveland. Upon graduation, he enlisted in the Navy and passed up aviation training to do a 9-month-long tour on the Louisville in 1939 and 1940. He took the regular US Naval Academy examinations onboard the Louisville in the spring of 1940, passing and entering the Naval Academy as a service member. He received a Bachelor’s of Science in Engineering in 1943 (the classes were shortened to meet the troop needs of WWII). His Naval Academy yearbook describes him as a “gadgeteer par excellence and an assiduous minutely accurate workman”. How true!
He met his wife, Betty Amer, while he was in Florida training for flight indoctrination. They met on a blind date and were married at the Naval Academy the following summer. After 68 years of marriage, Betty predeceased him 4 years and one day earlier, in February of 2013.
Ed served in the Pacific Fleet during WWII and received commendations for action in Green Island, Saipan, Guam, Okinawa, the Philippines, Leyte Gulf, and the Japan bombing. He also served in the Pacific during the Korean Conflict. As many of his generation, those conflicts shaped his life and became a huge part of who he was – even if he didn’t speak of them too often. He became a career Navy officer and his final posting was Supervisor of Shipbuilding New York where he retired after 27 years of service. He then worked in New York City as a naval architect at the design firm of M. Rosenblatt and Son and lived in West Caldwell, NJ. He moved to Williamsburg to lead the company’s Newport News office.
He had many hobbies, including an almost obsessive attraction to personal computing, absorbing hours of his solitary time. He would discuss computers and programming with anyone who showed even the slightest interest. He put his obsession to use by volunteering time with local elementary schools. At the age of 91, he started Skyping and often recommended computer programs with new data approaches to his children and grandchildren. He volunteered with the Golden Retriever Rescue, Education, and Training (GRREAT) and enjoyed golf.
He is survived by his two daughters, Ann Meyer of Williamsburg and Susan Stock of Shelburne, Vermont. He also leaves behind 7 grandchildren, 7 great-grandchildren, and a brother, Richard. All will miss him greatly. A memorial service will be held on April 29, 2017 at 11:00am at St. Martin’s Episcopal Church , 1333 Jamestown Rd., Williamsburg, VA 23185. In lieu of flowers, donations may be made to Friends of the Williamsburg Library (http://www.wrl.org/about-us/wrl-friends/friends-wrl) or to GRREAT (http://www.sevagrreat.org/).

To leave a condolence, you can first sign into Facebook or fill out the below form with your name and email. [fbl_login_button redirect="https://vacremationsociety.com/obituary/edward-stock/?modal=light-candle" hide_if_logged="" size="medium" type="login_with" show_face="true"]
×