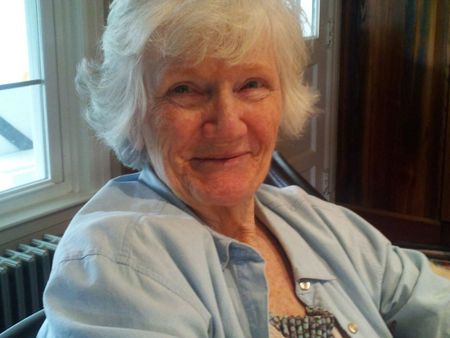 Elizabeth “Betty” Leeming Dillon
Virginia Beach – Elizabeth “Betty” Leeming Dillon, of Virginia Beach, departed this life on December 2, 2012 at age 84 after a brief illness. She was born on August 4, 1928 in Xenia, Ohio to the Reverend Arthur Leeming, originally of London England and Kathryn Beattie Leeming, originally from Philadelphia, Pennsylvania, both of whom predeceased her. As a teenager, Betty grew up at the Hoffman Home Orphanage in Gettysburg, Pennsylvania where her parents were the head administrators. She graduated from Gettysburg High School as valedictorian and Ursinus College where she was instructed by some of the same professors who had taught her parents and where she was co-editor of the paper. In 1948, she participated in the first Eleanor Roosevelt Encampment for Citizenship. After college, she became a reporter for the Ledger Star Newspaper in Norfolk, Virginia. She married James Lee Dillon, who has predeceased her, originally of Martinsville, Virginia and together they lived on the water at Willoughby Spit with their Scottish Terrier Jiffy before the construction of I64 and the Hampton Roads Bridge Tunnel. For a year, they lived in Boston, Massachusetts while Jim attended Harvard and Betty worked for a Harvard Professor. In 1961, she moved to Richmond, Virginia and was instrumental in starting the Richmond Montessori School. While raising her two sons, and providing in-home care for her father, she also worked as a freelance newspaper reporter and photographer for the Richmond Times Dispatch and the News Leader – and as a stringer for the New York Times. The interior of her brick and slate Georgian home was a post-modern delight. And her multigenerational Christmas Parties were not to be missed. Her passions included discussing literature with her book club friends, creating free-form pottery on her wheel and in her kiln, making nearly all of her own jewelry, knitting sweaters of her own abstract designs, and photography – especially macro lens close-ups of oddities deposited at the shoreline by the sea. In 1978, she moved to the North End of Virginia Beach where she enjoyed seaside living, hosting seasonal guests and caring for her mother until her death in the year 2001 at the age of 100. She is survived by her son, Christopher Scott Dillon, and his wife Alexandra Martin Dillon of Gum Spring, VA and her son, Mark Thomas Dillon, of Richmond, VA. Cremation Society of Virginia is handling the arrangements. Online condolences may be expressed to www.cremate.org. In lieu of flowers, please consider a donation to the Virginia Aquarium and Marine Science Museum.

To leave a condolence, you can first sign into Facebook or fill out the below form with your name and email. [fbl_login_button redirect="https://vacremationsociety.com/obituary/elizabeth-betty-leeming-dillon/?modal=light-candle" hide_if_logged="" size="medium" type="login_with" show_face="true"]
×