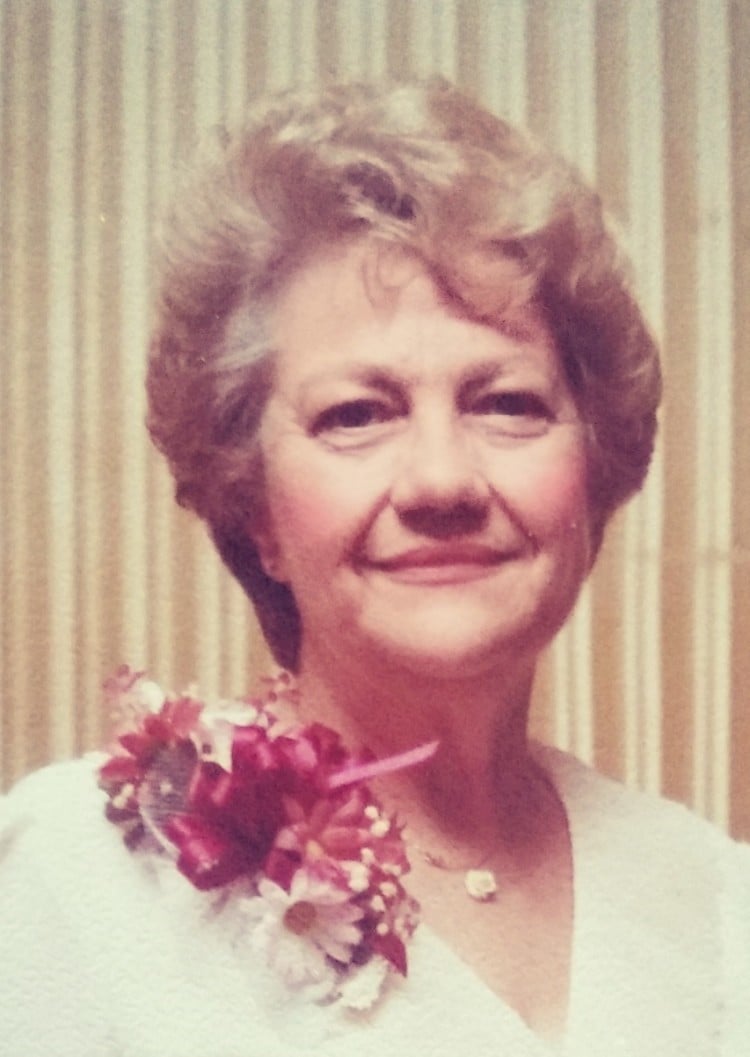 Emily Winn Mooza lived a long and abundant life for 92 years. While the last years of her life were compromised, there were still many ways that she continued her lifelong pattern of helping others.Throughout the many years of illness, her ability to love and show compassion was ever-present.
Emily was born on May 21, 1924 in Henderson, NC to Mary Ethel and Joseph Ernest Winn. She was the youngest of 5 children. Emily attended Louisburg College after graduating from high school as the Valedictorian. She moved to Newport News to support the war efforts and met the love of her life, Victor Roman Mooza, (deceased) an Army officer who had moved to the area from Boston. The southern lady and northern gentleman married and had 5 children, Harry Thomas (Carol Pesko), Vicki Winn (Robert Lanier), Charles Daniel (Patricia Carter), Mary Emily (Scott Windham), and Victor Malone “Buddy”(deceased). The family continued to grow with 9 grandchildren to include Clair and Joe, Laura and Robbie, Bridgette, Danielle and Laura, Brady and Robert. Now there are more marriages with 5 great-grandchildren. Family was always a most important priority to Emily!
Emily was interested and involved in professional and community activities. She and her husband,Vic, founded and operated their business, Hampton Roads Testing Laboratories,Inc. Throughout the years, her compassion for people and her professional expertise were greatly admired in the coal industry where there were few women. Emily became famous for her She-Crab Soup, extending hospitality to many international guests. Being highly respected by the coal community, she was chosen as the first female Honorary Member of the Hampton Roads Coal Association. She was a founding member of the Virginia Brain Injury Foundation following the tragic accident and injury of her youngest son, Buddy.
Emily was an active participant and a long-term member of St. Andrew’s Episcopal Church. In her earlier years she taught Sunday school and supported Missionary Projects. In her retirement years she served on the Vestry and was a Stephen’s Minister. She also volunteered with Meals on Wheels, VLM, PFAC, and was an active participant in CNU’s Life Long Learning Society. Emily loved traveling and learning about other cultures. Each year included a visit to her “One Happy Island”, Aruba.
In lieu of flowers, contributions may be made to St. Andrew’s Episcopal Church or a charity of your choice.
A Memorial Service is scheduled at 11:00 am on October 24th, St Andrew’s Episcopal Church, 45 Main Street, Newport News, VA 23601. Family and friends will gather following the service.
Condolences to the family may be made at vacremationsociety.com.

To leave a condolence, you can first sign into Facebook or fill out the below form with your name and email. [fbl_login_button redirect="https://vacremationsociety.com/obituary/emily-winn-mooza/?modal=light-candle" hide_if_logged="" size="medium" type="login_with" show_face="true"]
×