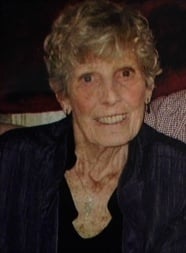 Evelyn Valentine Verry, 86, passed on to life eternal February 11, 2013 at Hampton Sentara Careplex.
She was born in Cranston, RI, daughter of the late Erick and Judith Valentine. After graduation from Edgewood Junior College, she worked at Kenny’s Manufacturing as personal secretary to the owner.
Sweethearts since the 7th grade, the Verrys Stan and Ev grew up and were married in Cranston, RI. A year after the birth of their son, Jeff, they moved to Bedford, NH were they made their home for 10 years. Stan was transferred and they moved to Newtown, CT, and spent the next 38 years. They bought the former Beech Memorial Library, and made it their home on Main Street. Ev was very active in her church, being the secretary for the Sunday school, as well as a teacher and Stan as Deacon and Trustee. Ev was involved with the founding of Cornerstone Store, a thrift store run by the Newtown Congregational Church. Ev was also very involved in municipal service, being the Assistant Controller of the Town of Newtown for several years. She was also a founding member of the Rocking Roosters Square Dance Club, and an active member of the couples club at church. In 1976, the Verry family opened the 10-4 Store, a retail electronics company where Ev participated in store ownership until 1991. In 1998 the Verrys moved to Hampton, VA to reside near their son. They have been active members of First United Methodist Church Fox Hill, Ev being a member of the United Methodist Women’s Wesley Circle.
Evelyn is survived by her loving husband of 64 years, Stan Verry; son Jeff and wife Nancy; sister Vivian Givens; Beth Verry, mother of her grandchildren- Jeff Jr, Erick and Kristen and 4 great-grandchildren. She also leaves many dear cousins, nieces, nephews and friends.
A celebration of Ev’s life will be held at First United Methodist Church Fox Hill, 1 Salt Pond Rd in Hampton, VA on Saturday, February 16, 2013 at 11:00 a.m. with Rev. Brian Sixbey and Rev. Tommy Markham officiating.
In lieu of flowers the family requests donations be made to the Music Ministry at First United Methodist Church Fox Hill. Condolences may be made to the family at www.cremate.com.

To leave a condolence, you can first sign into Facebook or fill out the below form with your name and email. [fbl_login_button redirect="https://vacremationsociety.com/obituary/evelyn-valentine-verry/?modal=light-candle" hide_if_logged="" size="medium" type="login_with" show_face="true"]
×