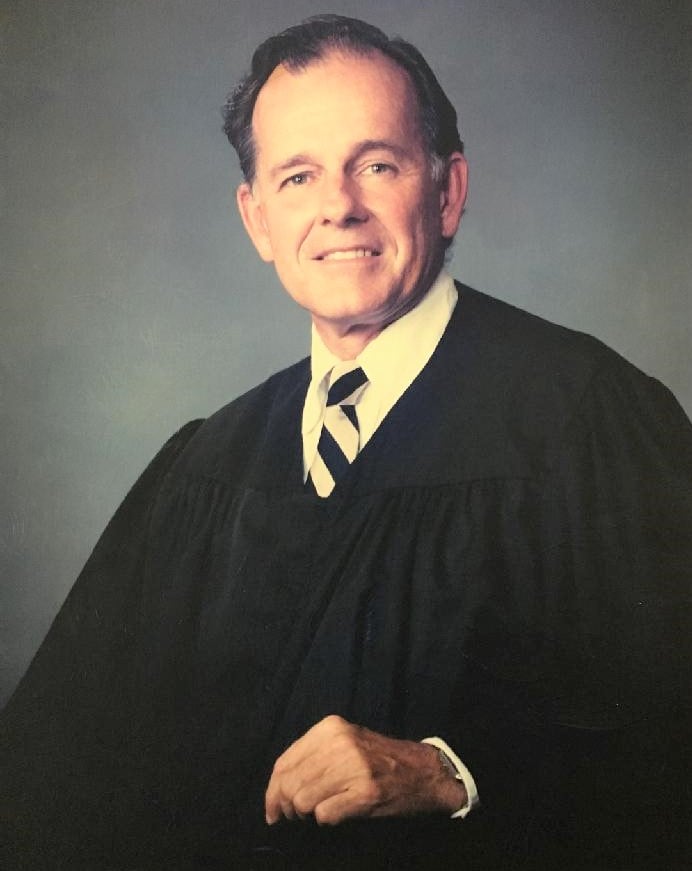 The Honorable Frederick P. Aucamp, 89, passed away peacefully on August 7, 2022 at his home in Virginia Beach.  Fred was born in Philadelphia, Pennsylvania on April 30, 1933 to Frederick and Regina Aucamp.  He was a graduate of Central High School in Philadelphia and earned his undergraduate degree from the College of William and Mary in 1954.  After two years of military service in the US Army, Fred returned to William and Mary where he received his law degree from the Marshall-Wythe School of Law in 1959.

Fred practiced as an associate and then as a partner with the Norfolk law firm of Rixey and Rixey for over 12 years.  In January 1972, he was appointed as the first full-time judge of the Juvenile and Domestic Relations District Court of the City of Virginia Beach where he served until his retirement in January 1992.  In addition to his court duties, Fred was actively involved in the improvement of the administration of justice in the Commonwealth.  He served as a member of the Committee on District Courts and on the Judicial Council.  He was elected president of the Juvenile Judges Association and served as chairman of the Governor’s Child Support Commission.  He also served on the Council of Criminal Justice and was responsible for the implementation of rules of court for the juvenile courts.  Fred was instrumental in creating numerous programs to help troubled youths, even making his own home one of five temporary homes in Virginia Beach.  In addition, he served as president of the Y’s Men’s Club, president of the Good Government Association of Virginia Beach, and served on the Board of Directors of the YMCA, Boy’s Club, Big Brothers, and the Alcohol and Drug Abuse Council.  After his retirement, Fred continued to sit on a regular basis as a substitute in both Juvenile and General District Courts throughout Virginia.  In addition, he established the Commonwealth Arbitration Group in 1993 to provide mediation and arbitration services in the Hampton Roads area.

Fred developed a passion for golf as an adolescent playing with his dad in Philadelphia and as a member of his high school golf team.  He played on the varsity golf team at William and Mary and coached freshman golf while in law school.  As a young novice lawyer in 1959, he won the Virginia State Open Amateur Division Golf Championship and joined the Princess Anne Country Club later that year.  In 1960, Fred won the Norfolk City Amateur Golf Championship, and in 1963 and 1968, he won the Becraft Memorial Golf Championship.  He was club champion at the Princess Anne Country Club in 1968 and 1974.  Playing golf locally with his many friends and traveling to play courses throughout the country gave him much enjoyment and inspiration in his mission to perfect his game.  Two golfing highlights were the opportunities to play at Pebble Beach, California in 1999 and in Ireland in 2001.

Another passion for Fred was construction where he applied his talent and skill in extensive residential and commercial building projects and subdivision development.  After building a cabin in the Blue Ridge Mountains with friends in the early 1970s, he earned a Class A Contractor License and built three houses in Sandbridge.  By 1980, he had designed and built one of the first passive solar houses in Virginia Beach for his personal residence followed by other projects including condos, office buildings,

and three houses in Massanutten.

In addition to the physical demands of construction and golf, Fred, an avid exercise enthusiast, enjoyed competitive sports including handball, racquetball, and squash.  He played on a senior soccer league and a city volleyball league.  He began jogging the sands of Virginia Beach in 1959 and continued to jog, swim, and do his “daily dozen” on the beach for many years.  When he could no longer jog, walking became his passion, and he rarely missed a day of at least one good walk.  To ensure a well-rounded workout program, he invented and patented a small, portable exercise machine called the HOT (Home-Office-Travel) Gym which he used daily.

Truly a Renaissance man, Fred will be remembered not only as an honorable public servant with intuitive insight to solve problems and find solutions, but as a kind and loving gentleman who touched many lives with his knowledge, compassion and sense of humor.

In addition to his parents, Fred was predeceased by his first wife, Barbara H. Aucamp; son, John Aucamp and his wife, Susan.  He is survived by his wife of almost 16 years, Fay Aucamp; son, Robert Aucamp; daughter, Elizabeth Aucamp; and daughter, Lesley Groves and her husband, Cecil; seven grandchildren and seven great-grandchildren. He is survived also by his brother, Donald Aucamp and wife, Carol; and brother, Richard Aucamp.

At Fred’s request, no service will be scheduled.  A reception to honor Fred’s memory will be held at the Princess Anne Country Club on Thursday, August 18th from 4:00 – 6:00 p.m.

In lieu of flowers, please consider a memorial contribution to the Virginia Beach Volunteer Rescue Squad or to a charity of your choice.

To leave a condolence, you can first sign into Facebook or fill out the below form with your name and email. [fbl_login_button redirect="https://vacremationsociety.com/obituary/frederick-phillip-aucamp/?modal=light-candle" hide_if_logged="" size="medium" type="login_with" show_face="true"]
×