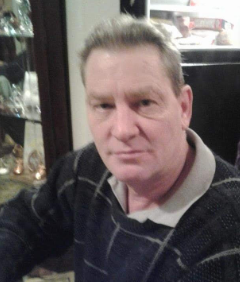 George enlisted in the United States Navy in 1980. On June 22, 1980 he married the love of his life Rosemary Collins of Palatine Bridge, NY and they resided in Virginia Beach where he was stationed at Oceana. They remained married for 26 years.

George worked for many years for Resource Building and then Community Housing Partners doing new construction and renovations. He was a well-known drummer in the Virginia Beach area in the 90’s playing in such bands as The Release, The Roommates, filling in on occasion in Richard Spano’s band, Johnny Driveshaft, Bigger Dreams and Final Notice as well as other bands. He loved working on his mopar cars especially his 70 Roadrunner and playing his harmonica. He mostly loved having his friends over to barbeque and play music in his band room.

His ashes will be interred at Albert G. Horton, Jr.  Memorial Veterans Cemetery in Suffolk, Virginia where he will receive military honors. A celebration of life will be announced at a later time.

A special thank you from all the family to Cordie Martin of Virginia Beach, whose tender compassion and care for George was greatly appreciated.

To leave a condolence, you can first sign into Facebook or fill out the below form with your name and email. [fbl_login_button redirect="https://vacremationsociety.com/obituary/george-ambrose-horning-jr/?modal=light-candle" hide_if_logged="" size="medium" type="login_with" show_face="true"]
×