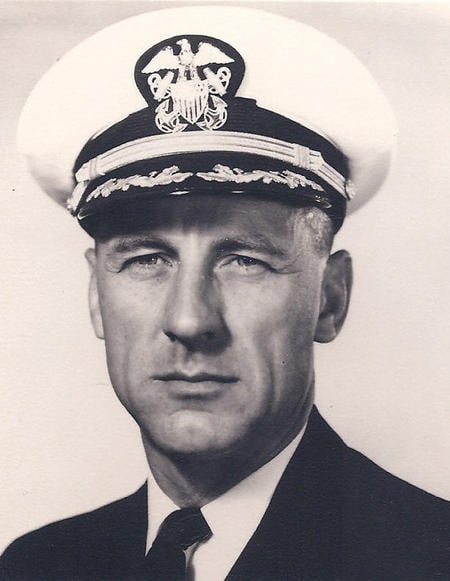 Captain Skinner began his naval career as a Seaman in 1943 and served on active duty and the ready reserve until he was commissioned in May, 1949. He was designated a Naval Aviator in 1950. During his career he flew single and multi-engine aircraft. He was also a helicopter pilot and commander of Helicopter Combat Support Squadron Two. His service included duty on six ships: two amphibious command ships and four carriers, including ENTERPRISE and AMERICA. Among his final tours, he served as Inspector General for Commander, Naval Air Forces, US Atlantic Fleet.

A memorial service will be held at 2 p.m. on Tuesday, April 26th, at the
Westminster-Canterbury Chapel, Virginia Beach. Memorial donations may be made to the Ocean Park Rescue Squad or the Westminster-Canterbury
Foundation. Online condolences may be expressed at www.cremate.org.

Captain Skinner’s ashes will be scattered at sea on a later date.

To leave a condolence, you can first sign into Facebook or fill out the below form with your name and email. [fbl_login_button redirect="https://vacremationsociety.com/obituary/glenn-e-skinner-jr/?modal=light-candle" hide_if_logged="" size="medium" type="login_with" show_face="true"]
×