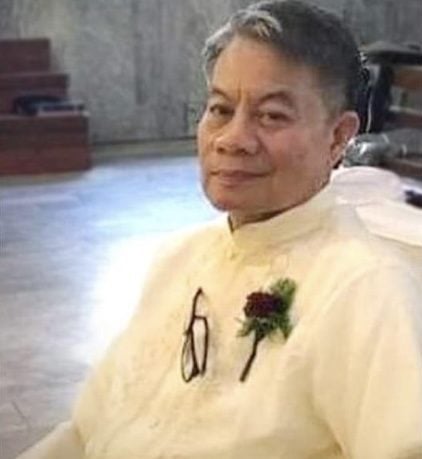 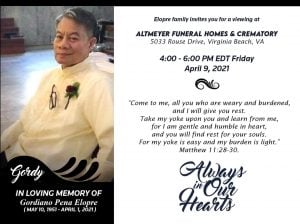 Gordiano “Gordy” Elopre, 69, passed away on April 1, 2021, in Virginia Beach, USA. He died in the ICU of Sentara Princess Anne Hospital from complications of COVID-19. Gordy was born to Filipino parents in Calabanga, Camarines Sur, Philippines on May 10, 1951.

He was the second eldest among 9 siblings. He was a loving and patient husband and hardworking father of six children. His children consider their dad a hero, idol, mentor, and a best friend, and still see him that way.

Gordy finished a degree in Electrical Engineering in Feati University and went on to become an electrical engineer until 2007. He worked in Naga City,  Manila and Bukidnon before spending his 24 years of career in Saudi Arabia. He moved to USA with his wife and spent most of the rest of his life in Virginia Beach until before he died. During the last few years and pandemic times, he was a frontliner in a school where he was dedicated in making sure that it was clean and disinfected.

Gordy was a simple, diligent and thrifty person. He was preparing for his retirement so he could spend the rest of his life in the Philippines with his family whom he had been longing to be with since he worked abroad. In his spare time, he loved reading books, playing chess, and solving crossword puzzles. He enjoyed learning more about history, and loved watching war and documentary films. He was passionate in fixing things, tinkering with electronic devices, and building computers. He also loved being outdoors whether doing an active sports like jogging, biking or hiking, or simply fishing, beach walking and stargazing. He was known as a man of few words and reserved person, but always had full of wisdom to share.

With all the challenges that he’s been through, he was strong-willed yet he dealt life with a positive and calm disposition, even until his last breath. Unknown to many, he was a strong fighter until the end of his life.

Gordy was preceded in death by his daughter, Ma. Concepcion, his father, Leoncio, and his mother, Florencia. He is survived by his wife Cyd, and his five children, Gabriel, Michael, Raphael, Emmanuel, and Maria Ana and their spouses and 7 grandchildren; his brothers, and several nieces and nephews and their families.

If you would like to donate to Gordy’s funeral fund, you may do so through this link: https://www.tmcfunding.com/funds/gordiano-gordy-elopre/5457/

To stream the visitation via zoom, click the following link and enter the meeting ID and passcode below: http://bit.ly/GordyLiveViewingFinal

To leave a condolence, you can first sign into Facebook or fill out the below form with your name and email. [fbl_login_button redirect="https://vacremationsociety.com/obituary/gordiano-gordy-elopre/?modal=light-candle" hide_if_logged="" size="medium" type="login_with" show_face="true"]
×