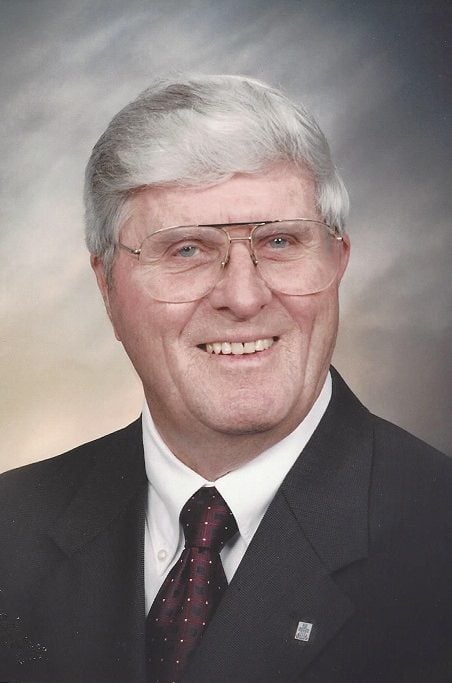 Bo was born on August 21, 1931, in Delaplane, VA, to the late Archie Dean Bohon and Alice Juanita Murdock. One of thirteen children, Bo (called Leroy by the family) was raised in a farming family amidst love, activity, and hard work. He graduated from Marshall High School in 1949. After working for the VA Highway Dept. and serving a three-year term in the Army during the Korean War, Bo earned a B.S. in Civil Engineering (1959) and M.S. in Engineering Mechanics (1961) from Virginia Tech.

Prior to college, Bo met his future bride, Kathleen Patricia “Pat” Deady of Roanoke. They married in 1955, and resided in Salem while he attended Va. Tech. After graduation, they made their home in Newport News. While there, Bo was active in church life at Hilton Presbyterian Church where he was a leader in several capacities and taught kindergarten Sunday School classes.

Bo began his career at NASA Langley Research Center in Hampton where he spent 30+ years in research, development, and management. He authored and co-authored numerous publications which benefitted government, private industry, and universities. His NASA career included research on aerothermal structures, aeroelasticity, fiber reinforced composite aircraft structures, and space structures. His work on the problems of panel flutter and thermal protection systems significantly contributed to the successful launch of the Space Shuttle. He received outstanding recognition for his management skills while leading the NASA Aircraft Energy Efficiency Office, and the Flexible Structures Program Office. Bo was very successful in the transfer of NASA-developed technology to the commercial transport aircraft industry. There are numerous applications of fiber-reinforced composite structures that are directly linked to Bo’s work. After retiring from NASA in 1989, his expertise as an engineering specialist and structural analyst was sought after, and he consulted for several corporations.

Bo moved his family to Crittenden, VA, in 1965, where he and Pat were very involved in community life. There, along with four other families, they started the mission that developed into St. Andrew Presbyterian Church. He contributed to church life there by serving as Deacon, Elder, choir tenor, Sunday School teacher, and Clerk of Session; and served on the Committee for Ministry for the Presbytery of Eastern Va. In the Ruritan Club, he served a term as president. He also was instrumental in founding the Nansemond Swim and Tennis Club and served as organizing president. Bo organized the Women’s and Girls’ Crittenden Softball teams where he coached for many years.

When Bo and Pat relocated to Gloucester, VA, in 2001 to be closer to their daughters and grandchildren, they became members of First Presbyterian Church (now Grace Covenant) where he served as Clerk of Session and Ruling Elder Commissioner at Presbytery meetings 2004-2006. In retirement, Bo and Pat enjoyed many activities including playing bridge, gardening, playing tennis, and relaxing at their beach cottage in Duck, NC.

From an early age, Bo excelled in athletics. In high school, he served as the captain and quarterback of his football team, captain of his basketball team, and played baseball. Later in life, he became an avid tennis player and golfer, finding great friendship in his sports buddies. He competed in golf tournaments and won second place in the Virginia State Super Seniors Amateur Golf Tournament when he was 75. He regularly served as a marshal for the LPGA tournaments at Kingsmill and Sleepy Hole golf courses.

Bo will be fondly remembered for his good cheer and sociability. He loved meeting and talking with people, genuinely interested in everyone. He was particularly devoted to his wife and daughters. Bo was immensely proud of Pat’s artistic talent and enthusiastically supported her shows, teaching, and gallery. He taught his daughters to fish, ride a bike, jitterbug, garden, play softball and tennis, and root for the Washington football team. Similarly, he delighted in spending time with his grandchildren fishing, golfing, visiting Short Lane Ice Cream, and sharing his joy of Christmas. Likewise, Bo loved his siblings, their spouses, his in-laws, and his many nieces and nephews. He delighted in gathering for annual Bohon family reunions for many years.

A memorial service celebrating Bo’s life will be officiated by the Reverend Keith Curran on Saturday January 7, 2023, at 1:00 PM at Chesapeake Retirement Community at 955 Harpersville Rd., Newport News. A reception will follow. A private service of interment at the columbarium at St. Andrew Presbyterian Church in Suffolk will be held in the spring.

To leave a condolence, you can first sign into Facebook or fill out the below form with your name and email. [fbl_login_button redirect="https://vacremationsociety.com/obituary/herman-leroy-bohon/?modal=light-candle" hide_if_logged="" size="medium" type="login_with" show_face="true"]
×