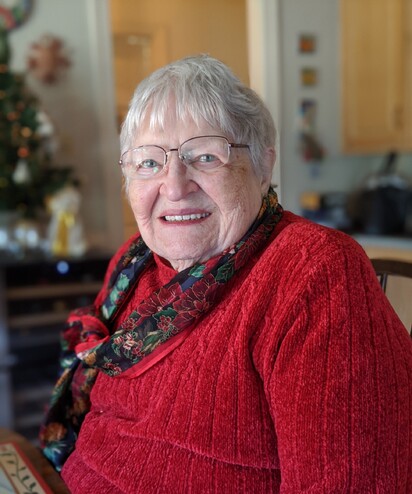 She was born in Atlanta, GA on March 16, 1927, the eldest child of the late Letticia and Richard Hillman Harris.   She attended college at Mercer University in Macon, GA, earning her bachelor’s degree in 1949.  She worked for many years as a bookkeeper at several colleges.

She met her husband, the late Rev. Donald J. Rooney, and they were married in 1959.  As the wife of a minister, Army Chaplain, and social worker, Hilda moved often with the family.  She was deeply supportive of her daughters’ activities, especially their Girl Scout troops.  She always provided hospitality and kindness to any who came to her home.

Hilda was tremendously proud of her family, especially her three daughters.  She relished seeing and speaking with her children, grandchildren, and great-grandchildren, and kept updated photos throughout her home of her large family.  Hilda loved to sew and was an excellent seamstress: she frequently made clothes, including the bridesmaids’ dresses for her daughters’ weddings.  Hilda was a great supporter of arts, education, and culture: she and her husband were regular attendees of musical and theater performances when they lived in the Washington DC area, and routinely took visiting family to the Smithsonian and other museums.  She continued this after moving to Atlantic Shores in 2005, and regularly attended Virginia Opera, Sandler Center, and Virginia Symphony performances until health prevented it.  Even then, she still listened to the opera every Saturday at home on WHRO radio.  Hilda was an avid reader and did the crossword every day.  She was also a devoted sports fan, and enjoyed watching Major League Baseball, Formula One racing, Premier League soccer, as well as the college sports teams of her grandchildren.

Hilda was preceded in death by her parents, her husband Donald, and her two younger brothers, Richard, and Donald.

A memorial service will be held at Altmeyer Funeral Home Southside Chapel, 5033 Rouse Drive, Virginia Beach, VA 23462, on Friday, August 5, 2022, at 4 p.m.  Burial will occur at a later date in Port Washington, NY.  Condolence may be left for the family at www.vacremationsociety.com.

To leave a condolence, you can first sign into Facebook or fill out the below form with your name and email. [fbl_login_button redirect="https://vacremationsociety.com/obituary/hilda-harris-rooney/?modal=light-candle" hide_if_logged="" size="medium" type="login_with" show_face="true"]
×