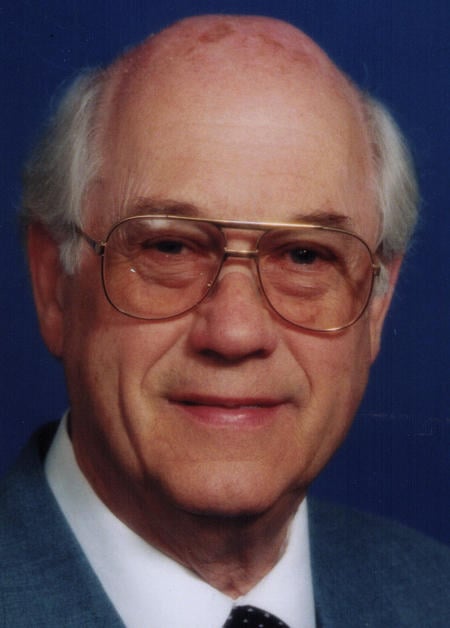 VIRGINIA BEACH-
J.A.G. Buddy Parrish, 82, passed away peacefully Sunday, Oct. 4, 2009 after a long battle with cancer. Loved ones at home surrounded him. Born Oct. 25, 1926 in Norfolk, he graduated from Maury HS in 1944. He enlisted at 17 1/2 years of age and spent three years during World War II serving as a radio officer in the US Merchant Marines. He resumed his education at The College of William and Mary and completed his BA degree from Duke University, where he was a member of Sigma Nu fraternity. He was later drafted into the Army and served in Germany at the end of World War II.

Once back in Hampton Roads, he entered the mortgage banking business. He served as a mortgage officer at Mutual Federal Savings and Loan Association, specializing in land acquisition, development, and construction. He also served as an Investment Banking Broker with Merrill Lynch and as an officer with the Norfolk Jaycees. In the mid 1970’s he served the city of Hampton as director for Promotion and Development playing a key role in the renewal and growth of old Hampton. He earned the distinction of “man of the year” in 1985 from the VB Republican Party.

During the 1990’s, he was the President of Mill Creek Condominium Association. The knowledge he gained led to leadership positions with the Virginia State and National Condominium Organizations. During this time he made a lasting contribution to evolving condominium law. For his 1996-2002 works with the Community Associations Institute he received a meritorious service award. He had served as Trustee and committee council chairman.

Buddy was passionate about politics and the legislative process. For 25 years he served as the Parliamentarian for the Republican Party of Virginia Beach. During the 20 years from 1989 until Sept 2009, Buddy served as the Chairman of the Electoral Board of Virginia Beach where he oversaw all local elections with an absolute dedication to order, honesty and non-partisanship. He became
President of the State of Virginia Electoral Board Association for two terms 1998 and 1999. For his long and remarkable participation in the electoral process, in 2008 he received the lifetime achievement award from the Virginia Beach Republican Party.

Buddy was a member of The Virginia General Assembly Real Estate Board where he helped deal with ongoing Virginia Real Estate issues including grievances. Dedicated to the process of improving local and state laws, Buddy often traveled to Richmond promoting legislation that he had spent significant amounts of time writing or helping to write. Buddy was known for his calm, honest, loyal and reliable demeanor. He was dedicated to public service and was passionate about the honesty and integrity of the electoral process. He will be missed.

He is survived by his loving wife of 39 years, Connie; sister, Shirley V. Parrish; daughter, Cindy Lackore and her husband Rock; daughter, Nancy Ware and her husband Mike; son, Randy Parrish and his wife Kim; granddaughters, Jayme O’Donnell and her husband Ryan, Melinda Lackore, Monica & Jennifer Ware; grandsons, Justin, Brandon & Alex Parrish; and a host of other colleagues and friends.

In place of flowers please send memorial donations to: The American Cancer Society at www.cancer.org or similar charity of your choice. A Memorial Service will be held Tuesday, Oct. 13, at 11 am with a reception following at: Thalia United Methodist Church, 4321 Virginia Beach Blvd. Virginia Beach, VA 23452. With Pastor Art Woltz officiating.

Cremation Society of Virginia, Hampton Roads office is assisting the family. Online condolences can be made at www.cremate.org.

To leave a condolence, you can first sign into Facebook or fill out the below form with your name and email. [fbl_login_button redirect="https://vacremationsociety.com/obituary/jag-buddy-parrish/?modal=light-candle" hide_if_logged="" size="medium" type="login_with" show_face="true"]
×