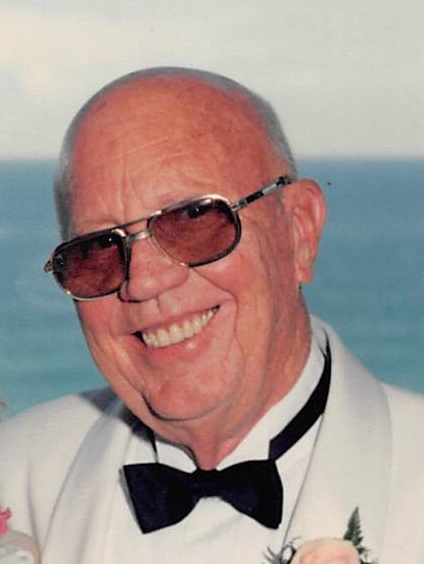 John A. (Jack) Dodgen, Sr., Retired Aerospace Engineer, died on April 29, 2017 at home in WindsorMeade in Williamsburg, VA. He was 90 years old.
Mr. Dodgen retired from NASA Langley Research Center in 1984 after 37 years of service. While with NASA, he contributed to the development and operations of the X-15 research aircraft, and the development and proof of feasibility of the Lunar Orbit Rendezvous concept used for the Apollo space program. Additionally, he was involved with the design, development, and application of a number of electro-optical remote sensors used to measure atmospheric and earth radiation parameters which were (and still are) incorporated in aircraft, satellites, and the Space Shuttle.
Mr. Dodgen received numerous awards including the NASA Medal for Exceptional Engineering Achievement prior to his retirement as Chief Engineer of the Flight Electronics Division in 1984. Subsequently he continued to contribute to the design and development of remote sensors as a consultant to NASA while also working with the Research Triangle Institute, Bionetics Corporation, and Science and Technology Corporation until his final retirement in 1994. Some of the technology he designed is still in use today.
In his spare time, Mr. Dodgen enjoyed working with the Lion’s Club, playing golf, and playing with his “girls” – Jack Russell, Panda and her predecessor, Trina.
Mr. Dodgen is survived by his daughter, Cathy Dodgen of Williamsburg,VA; his son, John A. (Chip) Dodgen, Jr (wife Patty) of Gulf Shores, AL; his stepson, Greg Williamson (wife Pam) of Lexington, NC; grandchildren, Dax Williamson and Dana Nordan of Lexington, NC and Felipe, Vitor, and John Dodgen of Gulf Shores, AL. Also four great grandchildren – Hannah, Blake, and Emma Williamson, and Lyla Nordan of Lexington, NC.
A Celebration of Life will be held in the Kensington Room at WindsorMeade of Williamsburg on Monday, May 8th at 3 pm. All who knew him are welcome to attend.

To leave a condolence, you can first sign into Facebook or fill out the below form with your name and email. [fbl_login_button redirect="https://vacremationsociety.com/obituary/john-a-jack-dodgen-sr/?modal=light-candle" hide_if_logged="" size="medium" type="login_with" show_face="true"]
×