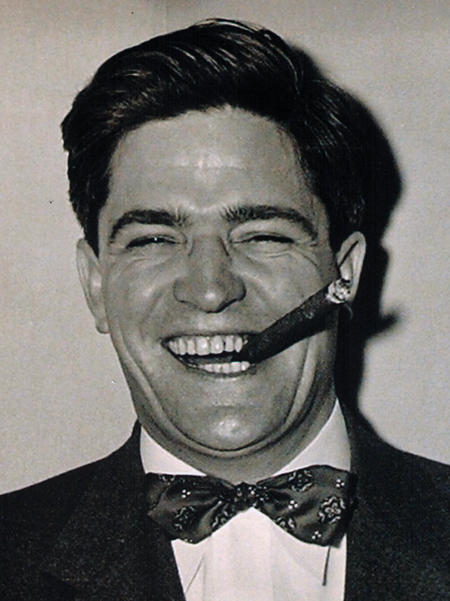 John F. Grady, 89, of Virginia Beach, Va., died Monday, Sept. 14, 2009, at Sentara Nursing Center – Windermere in Virginia Beach, surrounded by his family.
He was born Oct. 2, 1919, in the Roxbury Crossing neighborhood of Boston, Mass., the son of the late Bridget and Edward Grady. He was the youngest of six children.
Mr. Grady graduated from Boston Latin School, where he was a member of the debating team, and from Boston College in 1943 with a bachelor of arts degree in liberal arts. He was a cheerleader at Boston College. He earned a master’s degree in social work from Boston University.
He served in the U.S. Army Air Corps during World War II.
On May 19, 1951, he married Mary C. Lynch, who preceded him in death in 2005. Together, Jack and Mary had seven children. They lived on Beacon Street while he worked for the City of Boston, and later in Woburn, Mass. With their first three sons, they moved to Alexandria, Va., in 1956 when Mr. Grady was hired by the District of Columbia, after which he began a long career with the U.S. Government in the Department of Health, Education and Welfare now the Department of Health and Human Services. Most recently a program analyst for Medicare, Medicaid and Social Security, he retired in 1983.
He was a lifelong Democrat and a member of the Boston College Alumni Association. He was a greeter and long time parishioner of Star of the Sea Catholic Church.
Mr. Grady loved classical music and opera, spending time with his family, coaching baseball, and was known for his keen wit.
Family friend Michael Borza said, “I will remember him as a great man who embodied the best of the Catholic faith, a deep love of mankind; he was what Jesus would like us all to be. He was also a very good-looking Irishman from Boston who loved his wife dearly. He was so proud of all his children and knew that was his greatest accomplishment.”
Members of his family include his son and daughter-in-law, Jack and Lin of Marblehead, Mass.; son Robert of Burke, Va.; son and daughter-in-law, Daniel and Mary Catherine of Asheville, N.C.; daughter and son-in-law, Kathleen and Frank Mordecai of Virginia Beach, Va.; daughter and son-in-law, Maureen and James Nevins of Fredericksburg, Va.; son and daughter-in-law, David and Angela of Chesapeake, Va.; and daughter and son-in-law, Sheila and Paul Moye Sr. of Virginia Beach; sister, Betty Bishop of Peabody, Mass.; a dear sister-in-law, Kathryn McCarthy of Yarmouth Port, Mass; and many nieces and nephews.
Grandchildren include Heather, Shannon and Joey Grady; Katie, Emily and Erin Mordecai; Conor and Kerry Nevins; Trevor, Devin and Dillon Grady; Paul Jr., Patrick and Holly Moye; and the late Josh Grady.
In addition to his wife, Mr. Grady was preceded in death by three sisters, Genevieve, Mary, and Catherine; and his brother, Joseph.
He leaves behind many friends at Atria Senior Living in Virginia Beach.
The family wishes to thank the staff members of Sentara Windermere, Atria-Va. Beach, and Home Instead for their exceptional care and support.
A Mass of the Resurrection and celebration of his life will take place Friday, Sept. 18 at Noon at Star of the Sea Catholic Church in Virginia Beach.
In lieu of flowers, memorial contributions may be made to: The Jimmy Fund, Dana-Farber Cancer Institute, 10 Brookline Place West, 6th floor, Brookline, MA 02445-7226, ATTN: Contribution Services; or online at http://www.jimmyfund.org/gif/.
Arrangements are by the Cremation Society of Virginia, Hampton Roads office. Online condolences may be made to the family at www.cremate.org.

To leave a condolence, you can first sign into Facebook or fill out the below form with your name and email. [fbl_login_button redirect="https://vacremationsociety.com/obituary/john-f-grady/?modal=light-candle" hide_if_logged="" size="medium" type="login_with" show_face="true"]
×