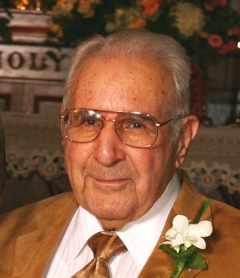 Joseph Hyder, 92, died on August 30 of cancer. His love of the sea was a driving force in his life. He served as a Merchant Marine in WWII and became a naval architect. He worked for American Shipbuilding, Mr. D.K. Ludwig at National Bulk Carriers and Exxon. His career relocated him to New York City, London, England, and Kobe, Japan. He retired in Virginia Beach in 1977 and built model ships as a hobby. But he said that his true legacy was his surviving daughters, Marilyn Richey and Joanne Hyder. He is survived by his sister, Annette Hyder, and was preceded in death by his beloved wife, Shirley Hayden Wells Hyder. His extended family include C.L. and Clara Wells, their children, Mackenzie and Chandler, and Cheryl and Daryl Bibb. They provided great support to him throughout his life.
He strove for perfection and set high standards for himself and all those he cared about.
A memorial service will be held on Tuesday, Sept. 6 at 3:00pm at the Westminister Canterbury Chapel. Donations, in lieu of flowers, can be sent to Lee’s Friends of Virginia Beach, 7400 Hampton Blvd, Norfolk, VA 23505. Online condolences may be expressed at www.cremate.org.

To leave a condolence, you can first sign into Facebook or fill out the below form with your name and email. [fbl_login_button redirect="https://vacremationsociety.com/obituary/joseph-hyder/?modal=light-candle" hide_if_logged="" size="medium" type="login_with" show_face="true"]
×