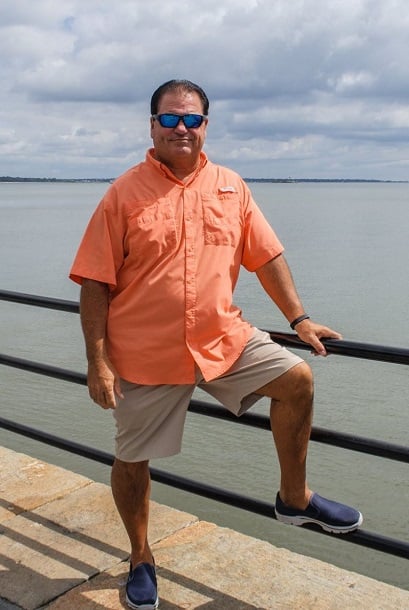 To Kenny, family was everything. He was steady, honest and respected and dedicated his life to his wife, boys and grandkids. He was most happy polishing glasses in the bar at Fin Seafood with son, Kenny or riding the tractor at the farm with son, Cory. His pride showed through his beaming smile in everything they did. His grandkids were the light of his life and he was most happy when his whole family was together. His favorite time was spending time at the beach with his toes in the sand having fun with family and friends.

Kenny was a native of Portsmouth, VA and a graduate of Churchland High School. He attended Virginia Tech and Old Dominion. Kenny joined Dominion Energy 1977 as a Non-Licensed Operator. During his career at Surry Power Station, Kenny attained his Reactor Operator in 1983. He held numerous leadership positions, including Shift Manager and Supervisor-Operations Support. In 1995, Kenny was promoted to Plant Manager. Kenny’s ten-year tenure as Plant Manager was the longest running in that position in the country at that time. Kenny retired from Dominion Energy’s Surry Power Station in 2014, after a long and distinguished 36-year career.

Kenny was an avid photographer and especially loved taking pictures of birds. His joy of life could be seen through the pictures he took. His memories will live on through his pictures. He touched everyone he met and will be remembered by his fun-loving spirit and his joy for life.

Kenny is survived by his wife of 46 years, Ellen Warrick Sloane; two sons, Kenny Jr. (Shannon) and Cory; his grandchildren, Kameron, Cassidy, Ryder, Brenned and Daisy Pritchard; his brother, Preston Sloane (Ann); his sister, Sandy Dills (Russell); his sister-in-law, Pat Edwards; his brother-in-law, Keith Warrick and everyone who knew him as “Papa Sloane”.

A Celebration of Life will be held on Sunday, May 1, 2022 at the Cypress Creek Club House, 600 Cypress Creek Parkway, Smithfield, VA from 1 pm-4pm.

In lieu of flowers you may make a donation to the Audubon Society.

To leave a condolence, you can first sign into Facebook or fill out the below form with your name and email. [fbl_login_button redirect="https://vacremationsociety.com/obituary/kenneth-b-sloane/?modal=light-candle" hide_if_logged="" size="medium" type="login_with" show_face="true"]
×