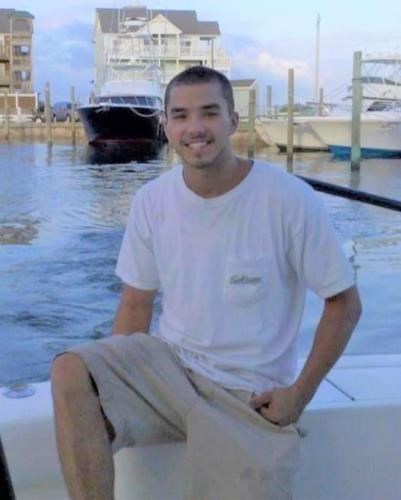 With deepest sorrow, we announce that Michael Charles Buehler, 34, of Norfolk, Virginia, passed away on Thursday, February 3, 2022 after a fatal car accident.

Michael was known by all as a waterman and a lover of the outdoors. From a very young age Michael loved to fish. He was introduced to fishing by his father and grandfathers. Michael purchased his first small fishing boat in high school; he later built his first offshore boat, The Captain David, from an old, bare, navy hole. With the help of the oldest and best builders in the area, The Captain David was his pride and joy. He eventually sold it and purchased a modern, fiberglass offshore boat, The Miss Kaylee.

He was taught by the best in the central Atlantic when he was young and then selflessly shared his knowledge with others who shared his passion. Just as Captain Donnie White did with him, when he was a rookie. Old timers were amazed how this young captain was so hardworking and dedicated to the water. They often said, “who taught that boy how to fish?!” Working the water was never work for Michael.

Michael is survived by his son, Cameron Buehler(12) of Hampton; his parents, Conrad and Elizabeth Buehler of Norfolk; his sister Kristen Roberts (Tim) and nephew, Penn Roberts of Charlotte, North Carolina, in addition to many beloved family members of eastern North Carolina. Michael is also survived by many local friends that were family to him.

His family will host a floating Celebration of Life at the Ocean View Golf Clubhouse on Saturday, February 12th from 6:00-8:00pm.

We appreciate the outpouring of love and support we have received from so many of you.

To leave a condolence, you can first sign into Facebook or fill out the below form with your name and email. [fbl_login_button redirect="https://vacremationsociety.com/obituary/michael-charles-buehler/?modal=light-candle" hide_if_logged="" size="medium" type="login_with" show_face="true"]
×