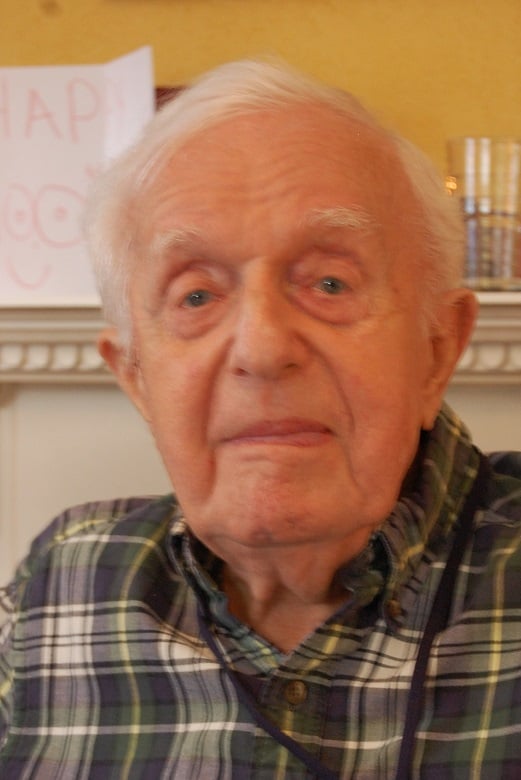 Michael Siegfried Dahm passed away in his Chesapeake home on Friday, March 13, 2015. Born in Berlin, Germany on February 26, 1915, he was a proud American who loved his adopted country, of which he became a citizen in August, 1957.
Mike was predeceased by his treasured Eva, or “Ev’chen”, his wife of 71 years. Also much loved were his sons Walt (Carol) of Castleton, Vermont and Ken (Betty) of Chesapeake, Virginia; his grandchildren Lori (Gerry), Walter (Robyn), Debbie (Steve), Colleen (Stefen), Paul (Carolyn) and Dottie; his great-grandchildren Kristen (Gary), Trevor, Megan, Amy, Claire, and Sophie; and great-great-granddaughter Savannah. Nephew George (Andrea) and great-nephews Derek and Akim were greatly loved as well.
Mike had celebrated his 100th birthday only two weeks prior to his passing, surrounded by family, friends, and neighbors. All shared stories about his long life and remarked on his accomplishments and his experiencing a century’s worth of world events.
The family is very grateful to the staff of Medi Home Health & Hospice, especially LaTonya, Toni, and Barbara, who cared for Mike for nearly three years with patience and genuine compassion. Thanks, too, to Janet, who was a great help in the final weeks of Mike’s life.
“Anfagen ist leicht, Beharren eine Kunst.”

To leave a condolence, you can first sign into Facebook or fill out the below form with your name and email. [fbl_login_button redirect="https://vacremationsociety.com/obituary/michael-s-dahm/?modal=light-candle" hide_if_logged="" size="medium" type="login_with" show_face="true"]
×