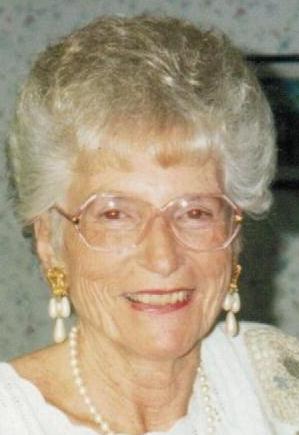 Virginia Beach – Mildred Finch Blanchard, 89, passed away on January 12, 2013. Mildred was born to the late Paul and Florence Finch. Also predeceasing her, was her husband, Nathan P. Blanchard, Sr. and her daughter, Patti Blanchard. Mildred worked as a supervisor at C&P Telephone Company and then became a home maker after having her children. She loved family gatherings, traveling to the mountains in the fall, and to Nags Head in the summer. She loved the beach and enjoyed shopping and playing bridge. Left to cherish her memory are her children, Joyce Cross, Chesapeake, David Linda Blanchard, Virginia Beach, and Nathan Cynthia Blanchard, Virginia Beach; grandchildren, Julie Kevin Larkin, Shelley Cross, Christina Ryan Ryckman, Cliff Dobson, Kelli Travis Tillson, and Andrew Megan Blanchard; great-grandchildren, Nate Tillson, Mason Tillson, Caitlin Larkin, Skylar Strausbaugh, Delaney Larkin, Annabelle Ryckman, and Nina Blanchard; and brother, Paul Ann Finch of Seattle, WA. There will be a private Celebration of Life for the family. In lieu of flowers, memorial donations may be made as CUM Memorial Fund in Memory of Mildred Blanchard to Christ United Methodist Church, 1601 E. Bayview Blvd., Norfolk, VA 23503. The family would like to thank Pam Turner at Atlantic Shores and Marcia Melquist with Hospice for their care during these difficult times. Cremation Society of Virginia is handling the arrangements. Online condolences may be expressed to www.cremate.org. As Mildred would say, “Talking to the Lord all day, couldn’t get along without Him”.

To leave a condolence, you can first sign into Facebook or fill out the below form with your name and email. [fbl_login_button redirect="https://vacremationsociety.com/obituary/mildred-finch-blanchard/?modal=light-candle" hide_if_logged="" size="medium" type="login_with" show_face="true"]
×