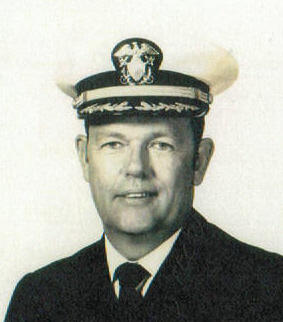 May 5, 1932-April 28, 2012. Captain Peter G. Frederick, USN ret, died peacefully in his home Saturday, April 28, 2012 in the arms of his beloved wife, Vaughan YaYa. Peter retired as the Executive Director of Norfolk Botanical Garden where he planned and executed its renaissance from 1989 until 1998. Peter was born in Bridgeport, CT as the second son of Eleanor Mae Griffith and Stanley Raymond Frederick. He grew up at 31 Grove Street in -Trumbull, CT until leaving home to earn a B.S. in Horticulture from Cornell University in 1954.
He joined the US. Navy and received his Wings in 1956. He was assigned to NAS Miramar in San Diego, CA from 1960-63. He next served on the Kitty Hawk flying A4s in 1964. Peter was selected for Command in l968 as CO of VA 153. Captain Frederick flew ninety combat missions and made more than 600 carrier landings. He attended Naval War College in 1971 and earned an MS in International Relations from George Washington University. He was selected for Captain in 1977 and served as naval attaché to Australia in 1978-80. His last naval assignment was as CO/ NROTC at Georgia Tech from 1981 until his retirement in 1984.
Peter returned to his love of horticulture as the Business Manager of the Atlanta Botanical Garden from 1986-1989. In 1989, Peter and Vaughan pulled up their Atlanta
roots and settled happily in Norfolk where Peter vigorously took on the challenge to privatize and expand the Botanical Garden. Peter retired as executive director of the Norfolk Botanical Garden 1998 in anticipation of cultivating his own garden at his Gardner Drive home.
For the past three years Peter ferociously fought the ravages of Alzheimer’s disease. It was with enduring gratitude to Papa’s “village” that YaYa was able to honor Peter’s request to remain in his home with his family. We mourn his profound loss and the memory of this steady, faithful husband, father, grandfather, gardener and aviator will hold a precious space in our hearts forever. Captain Frederick is survived by his forever bride Vaughan, his three daughters Karen, Susan and Lisa and their families, his “adopted” step-children Melissa and Robert Proctor, and his number #1 grandson” Eliot to whom Papa was hero, grandfather and father from the moment of Eliot’s birth.
The family wishes to thank all the staff at Heartland Hospice, especially Jack, Scott and “heavenly” Celeste, who cared for Papa and helped make it possible for us to have him in the center of our lives and home until his last heartbeat at sunrise Saturday morning.
Peter’s wish was to be cremated and his ashes returned to his wife to cherish and hold until hers can be mingled with his in their secret garden spot. The family will share a private memorial service, and would consider a donation to the Norfolk Botanical Garden Society or FACT. Families of Autistic Children of Tidewater a gracious and thoughtful remembrance. The Cremation Society of Virginia is handling arrangements. Online condolences may be expressed to the family at www.cremate.org.

To leave a condolence, you can first sign into Facebook or fill out the below form with your name and email. [fbl_login_button redirect="https://vacremationsociety.com/obituary/peter-griffith-frederick/?modal=light-candle" hide_if_logged="" size="medium" type="login_with" show_face="true"]
×