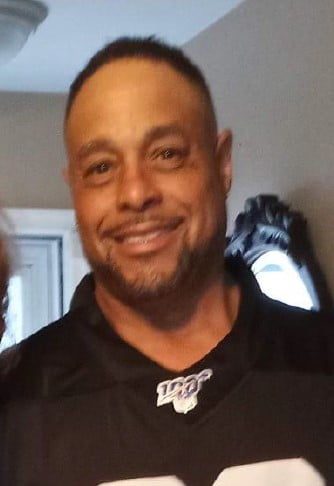 In Loving Memory of Phillip Randolf (Randy) Cooke III
June 27th, 1965 – June 18th, 2022 (56 years old)
Born to Phillip Cooke Jr. and Inell Perry Cooke.
Randy’s favorite past time was watching drag racing, fishing and spending time with his grandchildren. He was a devoted husband and father.
He was preceded in death by his father and grandparents. He is survived by his wife, Melissa Morgan Cooke; his daughter, Deonte Cooke; his stepdaughter, Marlyce Morgan-Banks; his mother, Inell Cooke; and his mother-in-law, Henrietta Morgan.
Additional survivors include his uncle, Lennox Cooke; his aunts, June Robinson, Lorraine Felder, Doris Gray; 4 special cousins, Michael Ogletree, Billy Ogletree, Kenny Gray, Derick Cooke; 3 grandchildren, Tedeon Cooke, Syncear Cooke and Samiya Cooke; as well as a host of other relatives. He was employed by The Bright View Landscaping Co.
Randy will be dearly missed by all that meet him and enjoyed his kind smile and good heart.

The memorial service will be held virtually on Zoom Saturday, July 30th, 2022 at 2:00pm

To leave a condolence, you can first sign into Facebook or fill out the below form with your name and email. [fbl_login_button redirect="https://vacremationsociety.com/obituary/phillip-r-cooke-iii/?modal=light-candle" hide_if_logged="" size="medium" type="login_with" show_face="true"]
×