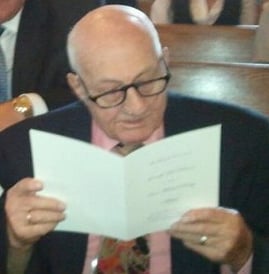 Raymond Thomas Nardoianni, 87, passed away surrounded by his loving family on February 4, 2013. Born in Utica, NY to Mary and Rocco Nardoianni, he was preceded in death by Antoinette Annutto sister and Peter Nardoianni brother. He is survived by wife Ann Lanigan Nardoianni and brother Ronald Nardoianni, 6 daughters—Mary, Kathy, Gina, Sheila, Theresa and Sharon—their spouses, 9 grandchildren, 5 great-grandchildren and several generations of nieces and nephews, as well as cousins in upstate New York and Italy.
He attended high school in Dolgeville, NY where he played in the band competing with other Mohawk Valley bands. He trained and worked at a dental lab in Syracuse, NY before enlisting in the Navy, where he drove an ambulance in Norfolk during WWII, where he met his future wife, Ann Lanigan. They were married on 11/11/44 and recently celebrated their 68th anniversary. Raymond retired from the US Post Office in Norfolk after 24 years as a letter carrier.
He and Ann had a thriving catering business, Nardi-Anna Catering, and provided the Italian concession the first 3 years of Harbor Fest. He was active in the Knights of Columbus, serving for a time as General Manager, a member of the Alhambra and also Sons of Italy. As a parishioner at Christ the King Catholic church, he sang in the choir and was a canter for 5 years.
He and Ann spent many happy times traveling to wonderful places, especially Italy where Ray has many relatives. He loved golf and regularly played with his golf buddies. His devotion to his wife and family was exemplary— the home, the center of family life.
A memorial Mass will be celebrated at Christ the King Catholic church on Saturday, February 9th at 10 AM. The family requests, in lieu of flowers, donations be made in his name to St. Jude’s Hospital. Cremation Society of Virginia is assisting the family. Online condolences may be expressed at www.cremate.org.

To leave a condolence, you can first sign into Facebook or fill out the below form with your name and email. [fbl_login_button redirect="https://vacremationsociety.com/obituary/raymond-thomas-nardoianni/?modal=light-candle" hide_if_logged="" size="medium" type="login_with" show_face="true"]
×