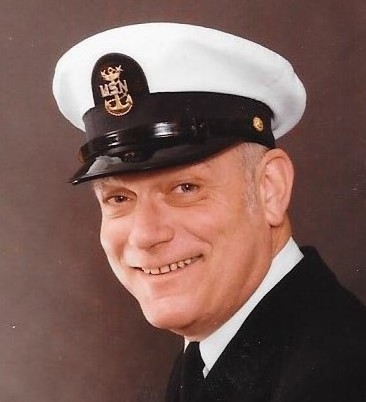 Richard T. Baumann, HMCM (Ret) passed away at home Oct 12 after a short illness. He leaves behind his wife of 54 years, Carol, his daughter, Stephanie Duncan (Ken), son Jeremy (fiancee Devin), six grandchildren, and two great grandchildren.
After thirty years in the Navy, he began a second career in Audiology, working at the Naval Station, Norfolk. While still working, he trained to become an Auxiliary Policeman in Chesapeake until age 70. He then went on to Portsmouth and became an Auxiliary Deputy. His final wish was to be buried at sea. No service is planned.

To leave a condolence, you can first sign into Facebook or fill out the below form with your name and email. [fbl_login_button redirect="https://vacremationsociety.com/obituary/richard-t-baumann/?modal=light-candle" hide_if_logged="" size="medium" type="login_with" show_face="true"]
×