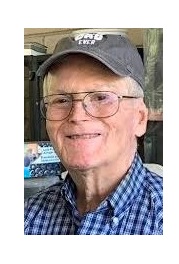 Robert George Silk, known to everyone as George, went to be with the Lord January 30, 2022.

George is survived by his loving and devoted wife Winnie and many supportive family members and friends.

He was a lifelong resident of Newport News and married his high school sweetheart on December 28, 1957.  There has never been any question about the love George and Winnie had for one another.  They often shared hugs without regard to who might be around to observe.

George graduated from Virginia Tech in 1959.  As a teenager, he worked with his father and uncle at Patrick and Silk Appliance Company in Downtown Newport News.  Following a career with Newport News Shipbuilding as an Engineer, he co-founded Agape Christian Bookstore, which was a cornerstone business in Hilton for 30 years.

George found joy in many things.  In recent years, he could be seen riding his bike with his dog in his basket.  He took his kids on bike rides we thought would never end.  He loved gardening and worked tirelessly raising vegetables and caring for the yard.

He enjoyed traveling and experiencing cultures that were foreign to him.  On one such trip, George and Winnie saw much of Germany, Holland, and Paris while visiting their son who was stationed in Germany at the time.

We spent many long hours in our station wagon traveling to and from sites in Florida, Georgia, both Carolinas, Tennessee, Kentucky, and Maine.  We once took a road trip to visit a pecan factory because their catalog always invited us to do so.  Once we arrived, we found they weren’t expecting us and there was nothing to see or buy.

Family vacations to the Outer Banks became the norm after that.  Over a period of time, George bought each of us a surf fishing rod that resulted in lots of laughs and many fond memories.

George has often been described as having the heart of a Pastor.  He loved visiting and caring for others in need.  He was never too busy or distracted to listen and never judged anyone by what they said.

He was soft-spoken, brilliant, and humble.  Ironically, he never realized he was the very picture of the type of man he most admired.  He was devoted to God, his wife, and family.

A Celebration of Life will take place at the World Outreach Worship Center/Congregation Zions Sake building located at 1233 Shields Road in Newport News on Tuesday, February 15th at 11:00.

To leave a condolence, you can first sign into Facebook or fill out the below form with your name and email. [fbl_login_button redirect="https://vacremationsociety.com/obituary/robert-george-silk-sr/?modal=light-candle" hide_if_logged="" size="medium" type="login_with" show_face="true"]
×