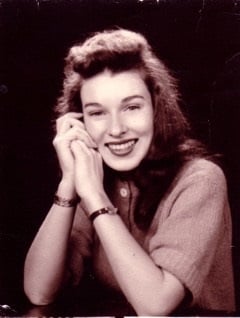 Shirley Biggs Brown, 88, passed away peacefully at home on August 27, 2016, surrounded by her loved ones.
Shirley was born to the late Donald and Cora Biggs in Craig, MO and moved with her family to Norfolk in 1942. She was preceded in death by her husband of 67 years, Alton Leo Brown; her son, Thomas Steven Brown; her brothers, Jim Quentin Biggs and Bill Biggs; and sister, Mary Sparrow.
Shirley graduated from Maury High School in 1946 and married Alton in 1949. They traveled extensively during Alton’s professional baseball career, eventually settling down in Norfolk in 1955. In 1968, the family relocated to Virginia Beach, where they would remain.
Alton and Shirley’s home was the center of their family’s universe, constantly teeming with kids, friends, and neighbors. She made it seem effortless, but Shirley worked constantly to make it a welcoming place for one and all. She especially enjoyed spending time outdoors working in her yard and flowerbeds. And as a lifelong animal lover, there was seldom a day you wouldn’t find a cat by her side as she worked.
As the unofficial family historian, Shirley had dozens of carefully curated photo albums to her credit, some dating back to the 40s. Family vacations to the Outer Banks were all the more entertaining when a handful of her photo albums made the trip. She was also an avid letter writer, frequently corresponding with her siblings and friends, catching them up on the recent happenings in the Brown family. And she would always remember to send a card or note to commemorate life’s special moments.
Christmas was her favorite time of year and she would spend the entire year on the lookout for just the right gifts for her loved ones. She would wrap them as she went, carefully stowing each treasure away for the big day, each labeled with the recipient’s name so she wouldn’t forget who was to get which. Her thoughtfully personalized, hand-sewn Christmas stockings were especially prized and will always be cherished reminders of her generosity.
Shirley was an incredible woman and the glue that bound her family together. She is survived by three daughters, Leslie Fournier (Mike) of Virginia Beach; Kay Brown (Robert Read) of Norfolk; and Kelly Howard of Norfolk; her son, Alton Matthew Brown (Jessica Majzoub) of Virginia Beach; her four grandchildren and six great-grandchildren.
At Shirley’s request, there will be no service. Cremation Society of Virginia is handling the arrangements and remembrances may be made at vacremationsociety.com. Memorial donations may be made to the Virginia Beach SPCA.

To leave a condolence, you can first sign into Facebook or fill out the below form with your name and email. [fbl_login_button redirect="https://vacremationsociety.com/obituary/shirley-biggs-brown/?modal=light-candle" hide_if_logged="" size="medium" type="login_with" show_face="true"]
×