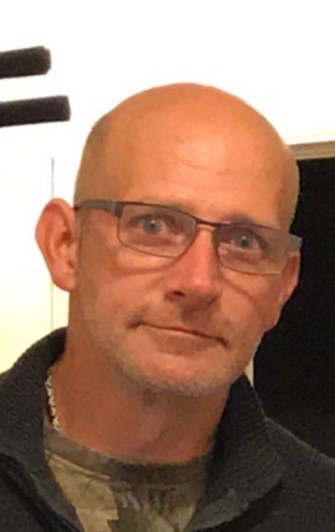 Stephen Thomas Breuss, 48, passed away Sunday, July 24, 2022, in Virginia Beach from a sudden cardiac event. Steve was born March 23, 1974, to Thomas and Diana Breuss at Quantico Marine Corps Base, Quantico, Virginia. He was a graduate of First Colonial High School in Virginia Beach.

On the hottest day in July 1999 (any sane person would have been inside an air-conditioned space) he married his wife Janean, in an outdoor ceremony at the Norfolk Botanical Gardens. The union resulted in his favorite person in the whole world, his son Jacob.

Steve enjoyed the water, learned to surf on the west coast and earned his diving certification in North Carolina at the age of 12.  He spent many a weekend water skiing and tubing in his teens. He enjoyed fishing excursions with son, Jacob, nephews and niece, Nick, Joshua and Kristina along with sister Kim and brother-in-law Darrell.  He played an occasional game of golf and loved solving the newspaper puzzles. The family cat Luna will miss his lap.

When son, Jacob, bought his first car, Steve enjoyed teaching him some of the finer points about car maintenance but was confounded with why he wanted a low-riding speed buggy instead of a pick-up truck.   Jacob will miss his dad’s skills in the kitchen, as he was an excellent cook, but could have used a little more spice.

Steve was predeceased by both his maternal and paternal grandparents.  Left to cherish his memory is his pride and joy, his son, Jacob, and wife Janean. His parents, Tom and Diana Breuss, sister Kimberly (Darrell) and multiple aunts, uncles, cousins, nieces, nephews, great-nephews and friends.

To leave a condolence, you can first sign into Facebook or fill out the below form with your name and email. [fbl_login_button redirect="https://vacremationsociety.com/obituary/stephen-thomas-breuss/?modal=light-candle" hide_if_logged="" size="medium" type="login_with" show_face="true"]
×