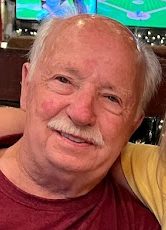 On Tuesday, 1/17/2023, Stony Lee Lassiter, loving husband, father, “Da”, brother, and uncle passed away at the age of 85. Born in Lasker, NC, Stony spent most of his life residing in Virginia Beach, VA, and his final season was spent in Colington, NC.  In addition to his parents, he was preceded in death by his beloved wife of 62 years, Sandra, and his sister-in-law, Ruth Lassiter. He is survived by his two daughters, Jeanie Lassiter Bush of Kill Devil Hills, NC and Kimberly Lassiter Hollander (Rob) of Poulsbo, WA. Stony has four grandchildren, Brittany Ann Phillips (David) of Colington, NC, Christina Rose Walker of Kill Devil Hills, NC, Kristopher Stony Bush (Macy), of Manteo, NC, and Kaitlin Leigh Hollander of Seattle, WA. He has five great-grandchildren and two great-great grandchildren. He was the oldest brother and leaves behind his siblings Calvin Lassiter (Joan), Brenda “Sissy” Flythe (Grady), David Lassiter, and Wray Lassiter all in Northampton Co., NC. He was close to Sandra’s sister, Cinda Pitcock of Chestertown, MD.

Stony retired from Krispy Kreme Doughnuts in 2001. When he wasn’t watching his Washington Redskins, you would often find him reading a book or the newspaper. Up to his passing, he could tell you detailed stories of his childhood through to his adult years. He would enjoy his evening rum and coke and dessert after dinner. He was regarded as one of the kindest men by those who had the privilege of knowing him and will be missed dearly.

A celebration of life will follow at a later date. Condolences may be offered at www.vacremationsociety.com.

To leave a condolence, you can first sign into Facebook or fill out the below form with your name and email. [fbl_login_button redirect="https://vacremationsociety.com/obituary/stony-lee-lassiter/?modal=light-candle" hide_if_logged="" size="medium" type="login_with" show_face="true"]
×