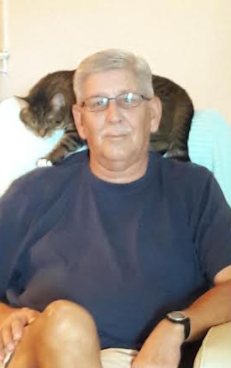 Thomas Wayne Miller passed away Friday, January 21, 2022 in Virginia Beach, VA with his wife Mary, his daughter Jennifer and his granddaughter, Erin by his side. He was born October 20, 1945 in South Miami Beach Florida to Howard and Betty Miller.

After his marriage to Mary, Tom joined the Army and was stationed overseas in Panama. After leaving the service, he returned to Va Beach to raise his family. He went to work for the Government and retired from the U.S. Coast Guard Finance Center in Chesapeake. After retirement he spent his time playing golf, becoming a Facebook guru, helping raise his granddaughter, and took care of his most recent girl, Daphne the cat he never knew he would learn to love.

He is survived by his mother Betty Peterson, his sister Nancy Rademacher, Janet Wagner, Kathy Pawlik, and Peggy Turner.

Tom did not want a service. He hopes those who remember him will think of something that made them laugh. In lieu of flowers, please make a contribution to the Va Beach SPCA. Condolences may be left for the family at www.vacremationsociety.com

To leave a condolence, you can first sign into Facebook or fill out the below form with your name and email. [fbl_login_button redirect="https://vacremationsociety.com/obituary/thomas-wayne-miller/?modal=light-candle" hide_if_logged="" size="medium" type="login_with" show_face="true"]
×