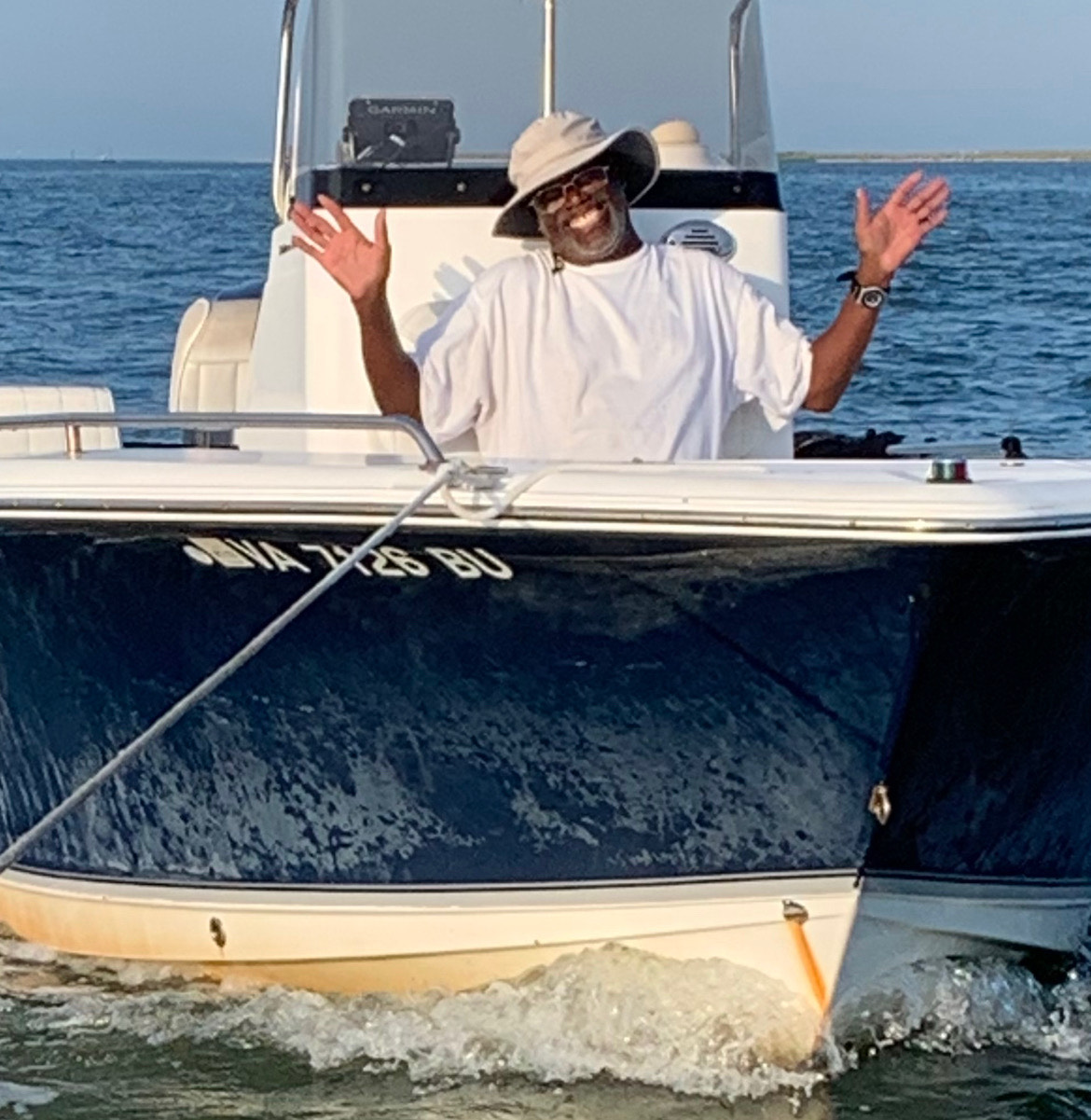 Tony A James (TJ), SMSgt Ret, USAF, of Yorktown, Virginia, entered the gates of Heaven on April 21, 2022.  Tony was born February 2, 1959, to the late Dora and John B. James, in Jacksonville NC, where he grew up.  Tony had a wonderful childhood but he would say the best thing growing up was fishing.  It was his passion back then.

Tony graduated from Jacksonville High School, Class of 1977 and enlisted in the Air Force November 1977. After basic training and technical training, Tony was assigned to Nellis AFB, Las Vegas Nevada, where not long after he met his future wife Valerie Ann DiCristofaro.

Tony and Valerie were married on December 31, 1981 in Las Vegas.  They eventually transferred to Lajes Field Air Base, Terceira, Azores, Portugal.  Three years later they were assigned to Offutt Air Force Base, Nebraska and their final duty station was Langley Air Force Base, Virginia.  Tony retired on October 1, 2003 with the rank of Senior Master Sergeant (E-8).  Tony earned many awards and decorations, culminating in a distinguished career of 27 ½ years of service.  He was highly respected by all who knew him.

He began his next career as a civil employee at Norfolk Naval Shipyard in Portsmouth Virginia, as a computer service technician, where he retired on August 1, 2020.

Tony earned his Bachelor of Science degree in Computer Science at St Leo University and many other certifications relating to computer technology.

Tony had many passions besides fishing, but his greatest were his wife, children and grandchildren.  He was a huge Pittsburgh Steelers fan and loved to brag that their last Super Bowl win was the day before his birthday.

Tony was loved by many.  He always spoke kindly about everyone.  He always had an infectious smile and a twinkle in his eyes.  He loved to pull peoples legs and had many quotes that will always be remembered.

Those who will never forget his smile and love are his wife, Valerie, his daughter Jade’ (VJ) and their children Tyhaadi’ and Tyjah’, Yorktown, VA, his son Torrey (Stephanie) and their son Jacob, Dillwyn VA.  Tony treasured his grandchildren immensely.  There wasn’t anything he wouldn’t do for them.

Tony leaves a host of aunts, uncles, cousins, nieces and nephews.  He also leaves some very close friends that he considered his brothers, sisters, sons and daughters.

Tony was greeted in heaven by his parents, his sister Denise, brother Ivory, his grandparents and his best friend from childhood, Moe Rouse.

In honor of Tony’s wishes, there will be no services.  Instead he asked to be cremated and his ashes spread by the duck blind near Langley AFB by his very good friend and fishing buddy, John Hunt.  He wants everybody to celebrate his life at a later date with a huge cookout.

A special thank you to Riverside Hospice team and Dr. George Kannarkat and his staff, Riverside Cancer Care Center.  We would also like to thank Dr. Gumpert and Dr. Graning of Portsmouth Naval Hospital.  Everyone took such great care of Tony until his final days.

In lieu of flowers, the family asks that anyone who desires, to make contributions to their favorite charity in Tony’s name.

We will always remember Tony for his infectious smile, twinkle in his eyes, quirky wit and his huge generous heart.

Keep shining down on us and one day, we will meet again on the other side.

To leave a condolence, you can first sign into Facebook or fill out the below form with your name and email. [fbl_login_button redirect="https://vacremationsociety.com/obituary/tony-anthony-james/?modal=light-candle" hide_if_logged="" size="medium" type="login_with" show_face="true"]
×